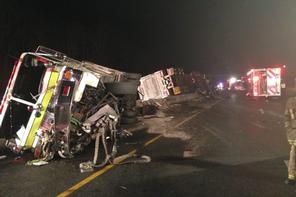 LANDOVER, Md. (WJLA) – Following a horrific morning accident on the Beltway, doctors are working tonight to save the arm of a firefighter critically injured. In all, seven people were hurt in the accident involving a fire truck, a tractor trailer and another vehicle.

Ryan Emmons, a 30-year-old lieutenant with the Prince George’s County Volunteer Fire Department, is resting after at least nine hours of delicate and intricate surgery to reattach his arm after it was severed from the elbow down in the 3 a.m. accident. He had just celebrated his promotion to lieutenant Sunday.

Dr. James Higgins, the head of the hand institute at MedStar Union Memorial and his team were ready and waiting for Emmons after they got word he was headed their way.

Dr. Higgins was one of the 16 surgeons who performed the first double-hand transplant in our area on Brendan Marrocco, an Iraq vet who lost all four limbs.

Firefighters who flocked to Baltimore after the accident said they were comforted to hear Higgins was working to reattach Emmons’ arm.

Late Wednesday afternoon, Prince George’s County Police released their preliminary findings on the accident which had the Beltway closed for hours, saying the fire engine was just leaving an accident call when it tried to make a U-turn at an emergency vehicle access point. Police say the engine collided with a tractor trailer, which sources say had the right of way. The two trucks slid into the median and hit a Jeep SUV. In all, seven people were hurt, including four firefighters.

Three of those firefighters have been released from an area hospital, County Fire Chief Marc Bashoor said. The fourth firefighter is in critical but stable condition.

Doctors credit Emmons’ colleagues for saving his arm by wrapping it on ice. So far his surgery was a success, but the coming days are critical.