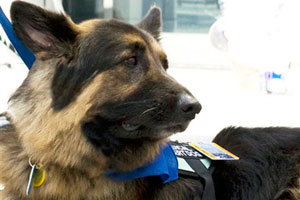 K9 Hero
Three years ago, Bear was an 100-pound Shiloh German Shepherd nobody wanted. That was until Debbie Zeisler came to his rescue at a Texas animal shelter.

When Zeisler had a seizure, fell down some steps, hit her head and lost consciousness, Bear scratched on every front door in their Millsap neighborhood, trying to help. But nobody answered. A Parker County animal control officer saw the frantic dog, and followed him to his owner.

Bear recognizes the signs of imminent seizures and will lean on Zeisler’s legs, so she can sit down before one happens, says the Society’s Ana Bustilloz. However, Bear never had any training.

In May, Bear was presented with the 30th National Hero Dog award by the Society for the Prevention of Cruelty to Animals in Los Angeles. The society flew Bear and Zeisler to California and awarded Bear with a year’s supply of dog food.

A few things are worth recognizing about this special K9: Bear’s innate abilities to care for his owner; Zeisler’s compassionate heart for taking him in, and the Society for the Prevention of Cruelty to Animals for realizing that heroes come in all shapes and sizes.

The annual award is presented to a leader who’s played a positive role on a national scale in creating and promoting non-clinical innovation and achievements in fire service EMS management. Metcalf has led national initiatives related to strengthening fire service capabilities in EMS, mutual aid and homeland security.

“It is both humbling and an honor to receive this recognition from my peers and colleagues in the EMS field. I have been truly blessed to have the opportunity to be present and participate in many of the significant developments that have taken place as EMS has grown and evolved over the past 30 years. I look forward to continuing to make leadership contributions to our profession for many more years to come,” says Metcalf.

Hilton Head Island (S.C.) Fire and Rescue and Howard County (Md.) Department of Fire and Rescue were honored as this year’s Heart Safe Award recipients for their outstanding achievement in developing creative approaches to implement and maintain systems to prevent and treat cardiac-related diseases.

“These departments are doing great work in cardiac care in their community,” said Chief Al Gillespie, International Association of Fire Chiefs president and chairman of the board.

We applaud Metcalf, Hilton Head Island Fire and Rescue and Howard County Department of Fire and Rescue for their outstanding efforts in helping improve patient care and advance the field of EMS both on a local and national level.

That’s a Wrap
The Geneva (Ohio) Fire Department (GFD) was looking for a simple and affordable way to paint an emergency response vehicle. When they discovered how much time and money would go into repainting it, they quickly realized they needed to explore other options.

So, after doing some research, the department decided to go with vinyl wraps, made by Avery Dennison. The product is a dual layer film that combines color and clear protective layers to provide a durable paint-like finish. A local sign shop did the finishing design touches.

Instead of putting the truck out of commission for four to six weeks like a paint job would have, the wrap took two to three weeks and only a few days to install.

“I would recommend a vinyl wrap to any of my colleagues that need to update the graphics on their vehicles,” GFD Chief Doug Starkey said in a statement.

We give a thumbs up to Avery Dennison for creating this innovative option and to GFD for thinking outside the box and saving valuable resources in the process. This article originally appeared in June 2012 JEMS as “Last Word: The Ups & Downs of EMS.”

0
This month, readers chimed in on two feature articles: one from May JEMS that discussed the prevalence of bedbugs (“What’s Buggin’ EMS: How to rid your rigs of a bedbug infestation,” by Wayne Zygowicz, BA, EFO, EMT-P) and one April clinical education article on treating penetrating trauma wounds (“Breaking the Surface: Arm yourself with knowledge about penetrating trauma,” by Bryan E. Bledsoe, DO, FACEP, FAAEM, EMT-P; Michael Casey, MD, & Ryan Hodnick, DO).