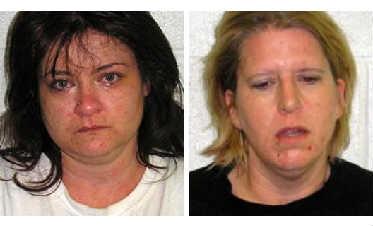 Two women who are former paramedics were arrested for placing a false 911 call for medical help and then breaking into an ambulance to steal drugs in Santa Fe last night.

Amanda Kay Grigg, 37, and Heather Elizabeth Bemrose, 39, both of Santa Fe, are accused in the case, according to the Santa Fe Police Department. Both are in the Santa Fe city jail.

Grigg is charged with burglary of a motor vehicle, possession of dangerous drugs and false alarm or report. She is being held on a total bond of $8,000.

Bemrose is charged with burglary of motor vehicle and false alarm or report with a total bond of $6,500.

It appears that the pair were trying to steal narcotics from the ambulance, police said.

Investigators said that about 7:20 p.m. Santa Fe police and EMS were dispatched on a call of a man down behind a business in the 4200 block of FM 1764.

But paramedics could not find the victim and later determined that the call was bogus.

When they returned to their station they caught Grigg and Bemrose breaking into an ambulance, police said.