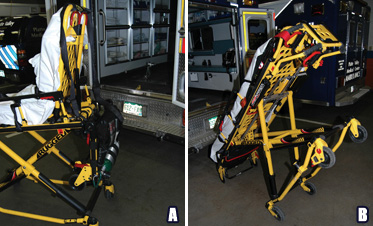 There_s no law that says you have to have a brain to race motorcycles, especially without a helmet. But as every EMSer knows, bikers do have brains. We see _em all the time.

A fast-moving biker can end up in some of the strangest places. I_ve found them in trees, on walls, under trucks, in storm drains and in other people_s cars. But I_m pretty sure there_s no worse place on earth you can find yourself extricating one from than a swamp full of bamboo.

Bamboo must be about the friendliest plant ever grown (to other bamboo plants, at least). They_re efficient, too. A single plant needs no more room to thrive than the diameters of its stalks (which can become trunks). Its leaves are way up at the top, where the stalks are narrower, so there_s more room to flap in the breeze. Bamboo_s also friendly to bugs, which live and hide down there close to the swamp water. And it_s probably friendly to the earth, converting all that muck into stuff we can breathe.

But to EMTs? Not so much. Bamboo_s really hard on EMTs. There_s no way to squash down a path through a bamboo thicket, so there_s nothing to stand on. As you struggle through the stuff, your weight just kind of wedges your boots in between the stalks. The young shoots go up your pants and stab you in the legs (or whatever else you might have up there). And plenty of those bugs crawl up your legs and bite you, over and over. That_s not counting the ones that can fly, which also bite you, over and over. (Ouch!)

By the time you find that poor ol_ biker, you_re so cranky at him for being such a dummy, you_re probably not in a very professional mood. Or, since bamboo stalks tend to move out of the way of flying bikers, maybe you do get to where the biker is. But he_s not hurt too badly, so he_s already scrambled out of there to sober up.

If you know a good trick for walking through bamboo, maybe you wouldn_t mind sharing it. But no matter what spanks _em, flying bikers aren_t well designed for landings. When they do break, they bleed. Sometimes, they bleed all over the inside of your ambulance.

Blood_s a good thing when it stays put. But nothing about blood is good for anybody when it gets loose (including its odor after a day or so). And your ambulance cot is just full of areas you can_t see, where blood and other fluids can collect. Mostly, those areas are on the dependent surfaces of tubes, bars and other odd-shaped features. Gloves are good tools, but unfortunately, they can deposit as much residue as they protect you from. And you routinely handle a lot of the under-surfaces of your cot without glovesÆ’like during your morning checks.

It would be pretty cool if there was a rack or something you could attach to your cot that could turn it upside-down for you. Or maybe an automated cot wash. But who_s got money for that? Hey, some of us are still hoping to get paid for this someday.

Fortunately, there are a couple of simple techniques you can use to inspect and clean the underside of a cot. Either one requires you to remove it from your ambulance and leave it fully raised, in loading position. You can get at the bottom surfaces of the head end by putting it into a high Fowler_s position and dropping the head-end support bar. (You knew that.) Then, once those bars are clean, reset them the way they were when you removed the cot from the ambulance.

Now tilt the whole cot toward the head end, so it rests on its head-end casters and its loading wheels. That position will reveal the under-surfaces of the upper and lower carriages. If you_ve never done that, chances are you_ll be surprised by what you find there. Might not be a bad idea to direct a little attention to the wheels, too. And don_t forget the latch handles while you_re at it.

We_re only talking a couple of minutes, here, to sanitize an entire cot. It may be a nuisance, but that_s what a professional does. Your first responders are worth it, don_t you think?

Not to mention you and your family.

Thom Dick has been involved in EMS for 36 years, 23 of them as a full-time EMT and paramedic in”žSan Diego”žCounty. He_s currently the quality care coordinator for Platte Valley Ambulance, a hospital-based 9-1-1 system in”žBrighton,”žColo. Contact him at”žboxcar_414@yahoo.com.