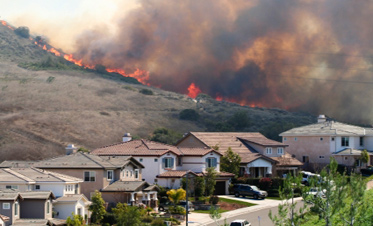 More than a dozen wildfires had engulfed the region, killing at least one person, injuring dozens more and forcing hundreds of thousands of evacuations. Overwhelmed firefighters said they lacked the resources to save many houses.

“We have more houses burning than we have people and engine companies to fight them,” San Diego Fire Captain Lisa Blake said. “A lot of people are going to lose their homes today.”

Nearly 250,000 people were forced to flee in San Diego County alone, where hundreds of patients were being moved by school bus and ambulance from a hospital and nursing homes, sheriff’s spokeswoman Susan Knauss said.

About a dozen blazes erupted during the weekend, feeding on drought-parched land from the high desert to the Pacific Ocean. One person was killed and several injured in a fire near the Mexican border, and dozens of structures have burned across the region.

In Orange County, a 1,049-inmate jail was being evacuated because of heavy smoke, sheriff’s spokesman Jim Amormino said. Inmates were being bused to another facility in Irvine.

All San Diego Police Department officers and off-duty detectives were ordered to return to work to help with evacuations.

For more on American Medical Response’s response capabilities from past wildfires, check out the 2004 JEMS article “Ambulance Strike Teams.”