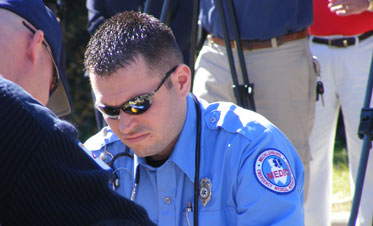 The conclusion from this study is that patients could experience a 6% increase or 4% decrease in mortality as a result of ALS response taking longer than 10:59 minutes. The authors further conclude: “[The] data are most consistent with the inference that neither the mortality nor the frequency of critical procedural interventions varies substantially based on this pre-specified ALS [response time].

The Street
We’ve been recording response time since the dawn of modern EMS. But does it make a difference how long it takes us to get there? This study is another attempt to answer this question. But whether it really answers that question for everyone is up for debate.

Medic Marshall:This study brings up some good points to examine from a street perspective, notably responding lights and sirens to calls when in the majority cases, a significant difference in the outcome of the patient is unlikely. Also, the study reports critical procedures performed in the field did not increase as a result of getting to the scene after the 10:59 minute benchmark, but why? With no mention of BLS response times and treatments rendered prior to ALS arrival, which could impact the resulting outcome of patients, it may skew the conclusion of this study.

There’s an inherent danger to responding lights and sirens. Your ambulance becomes a target, and startled drivers react unpredictably. So in the event you get into an accident responding to a call, resources would be depleted. In this scenario, more resources have to be allocated to you, your partner and the people in the vehicle you just collided with. Meanwhile, the original patient must now wait longer for another ambulance to come. My opinion is that this type of response is dangerous and possibly irresponsible.

What I took away from this study was that responding lights and sirens isn’t making a difference. So why not slow down? I think a good follow-up study would look at BLS care and patient outcomes.

Doc Wesley:I agree with most of the points raised by Marshall, but I’m afraid he’s reading more into the implications of this study than the authors prove. First, the article makes several assumptions which are not based on any scientific evidence. The most notable of these is choosing 10:59 as the benchmark for the arrival of the transporting ALS ambulances. This service had at their disposal 6,000 transports to examine, and they could have definitively determined what time point actually makes a difference and for what conditions. In this study, the authors combined both trauma and medical complaints. And it’s for this reason that there’s such a wide variation of potential benefit (or lack thereof) of arriving after 10:59.

My fear is that services will use this study to change their deployment when in actuality, what they must do is perform the very same analysis to determine what, if any impact, such a change would have on their patients.

As Marshall stated, one glaring omission from the study was the BLS response time for both groups. Was it the same? We don’t know. Without this information, I’m afraid no definitive conclusion can be drawn from this paper and that of the authors applies to their service alone.