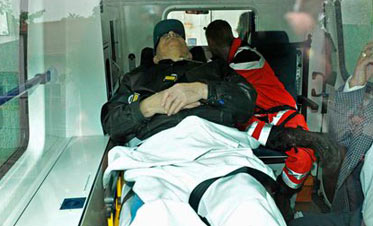 MUNICH — After three decades of fighting in court, John Demjanjuk arrived at a German prison on Tuesday, deported from the United States to face allegations of being an accessory to the murder of 29,000 Jews and others as a guard at the Nazis’ Sobibor death camp.

A judge is expected to read him the 21-page arrest warrant later Tuesday. If the retired Ohio autoworker is found fit to stand trial, it would be the culmination of a legal saga that began in 1977 and has involved courts and government officials from at least five countries on three continents.

Demjanjuk flew into Munich airport from Cleveland aboard a private jet that taxied directly Tuesday morning into a hangar, where he was transferred to an ambulance. Munich prosecutors said the 89-year-old Demjanjuk, who is allegedly in poor health, slept for most of the flight.

From the airport he rode in a police-escorted ambulance to a special medical unit at Stadelheim prison, where he was to be examined by a doctor and formally arrested.

The Ukrainian-born Demjanjuk says he was a Red Army soldier who spent World War II as a Nazi POW and never hurt anyone.

But Nazi-era documents obtained by U.S. justice authorities and shared with German prosecutors suggest otherwise. They include a photo ID identifying Demjanjuk as a guard at the Sobibor death camp and saying he was trained at an SS facility for Nazi guards at Trawniki. Both sites were in Nazi-occupied Poland.

Demjanjuk’s case is an example of how difficult it has become to bring alleged Nazi war criminals to trial more than six decades since the end of World War II.

After he is read the warrant, Demjanjuk can respond, although his lawyer, Guenther Maull, says he will recommend that his client remain silent.

The next step will be for prosecutors to formally press charges, which they said could happen “within a few weeks” providing “no exonerating arguments are made.”

Prosecutors said the court has already appointed a doctor who must determine whether Demjanjuk is fit to stand trial.

Efraim Zuroff, director of the Simon Wiesenthal Center in Israel, praised U.S. and German authorities for bringing Demjanjuk in.

“I think this is an extremely important day for justice and the fact that Demjanjuk, who actively participated in the mass murder of 29,000 Jews at Sobibor, will be put to trial is of great significance and reinforces the message that the passage of time in no way diminishes the guilt of the murderers,” he said from his office in Jerusalem.

Yet the key to Demjanjuk’s fate may lie not with the evidence but rather with a German court’s decision about whether he is medically fit to stand trial. In any case, Demjanjuk, who has been without a country since the U.S. stripped him of his citizenship in 2002, is likely to spend the rest of his life in Germany.

“It is a race against time,” Charlotte Knobloch, a Holocaust survivor, said in a statement.

“For survivors of the Shoah, it is intolerable to watch how a suspected Nazi war criminal, who knew no mercy for his victims, seeks sympathy and compares his deportation to torture,” she said, using the Hebrew term for Holocaust.

Demjanjuk insists he is innocent and fought bitterly for decades against efforts to strip him of his U.S. citizenship and later deport him.

Dramatic photos last month showed Demjanjuk (pronounced dem-YAHN’-yuk) wincing in apparent pain as he was removed by immigration agents from his home in Seven Hills, Ohio, in an earlier attempt to deport him to Germany. However, images taken only days earlier and released by the U.S. government showed him entering his car unaided.

Demjanjuk’s son, John Demjanjuk Jr., said Monday his father is dying of leukemic bone marrow disease and claimed he would not survive a trans-Atlantic flight.

Among the documents obtained by the Munich prosecutors is an SS identity card that features a photo of a young, round-faced Demjanjuk along with his height and weight, and says he worked at Sobibor.

German prosecutors also have a transfer roster that lists Demjanjuk by name and birthday and also says he was at Sobibor, and statements from former guards who remembered him being there.

The case dates to 1977, when the Justice Department moved to revoke Demjanjuk’s U.S. citizenship, alleging he hid his past as a Nazi death camp guard.

Demjanjuk had been tried in Israel after accusations surfaced that he was the notorious “Ivan the Terrible” at the Treblinka death camp in Poland. He was found guilty in 1988 of war crimes and crimes against humanity but the conviction was overturned by the Israeli Supreme Court.

That decision came after Israel won access to Soviet archives, which had depositions given after the war by 37 Treblinka guards and forced laborers who said “Ivan” was a different Ukrainian named Ivan Marchenko. Some identified Marchenko in photographs.

A U.S. judge revoked Demjanjuk’s citizenship in 2002 based on U.S. Justice Department evidence showing he concealed his service at Sobibor and other Nazi-run death and forced-labor camps.

A U.S. immigration judge ruled in 2005 he could be deported to Germany, Poland or Ukraine. Munich prosecutors issued an arrest warrant for him in March.