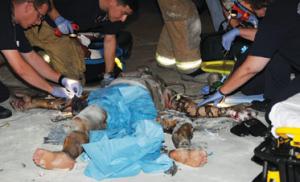 When first responders arrived at this Alief, Texas scene, they found the patient covered in a grayish-white powder, breathing but barely conscious. They learned he had been smoking a cigarette while pumping gasoline into a plastic, 1-gallon gas can when it ignited. He suffered partial-thickness and full-thickness burns to more than 80% of his body, with severe burns to his head and face, as well as anterior and posterior surfaces, including extremities. He was also in respiratory distress due to inhaled chemicals from a sodium phosphate fire extinguisher. Community Volunteer Fire Department responders covered him in a sterile burn sheet, initially treated him with oxygen via a non-rebreather mask, established multiple IV lines for fluid replacement and administered morphine for pain control. He was subsequently intubated, and Memorial Hermann Life Flight transported him to Memorial Hermann Hospital, a Level I trauma center. The patient later succumbed to his injuries.

Visit jems.com/extras to learn more about this call.