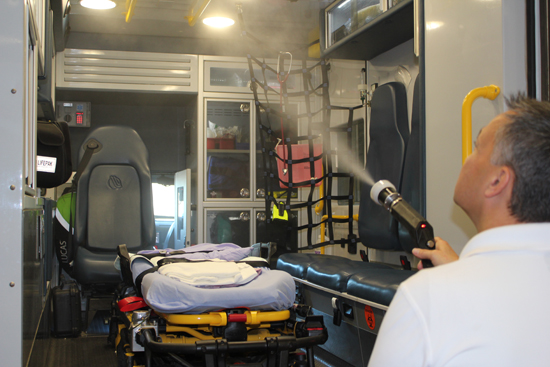 No matter where in the world we find ourselves, there are germs all around us. Bryan Burry, EMT-P, hopes to make ambulances, medical facilities and medical equipment largely an exception to this universal truth using a radical new sanitation technology that helps maintain hygienic environmental surfaces for extended periods.

Medical providers undergo great pains to ensure their equipment remains clean, safe and sterile, but especially in fast-paced EMS environments, maintaining a perfect standard of sanitation between frequent calls can be a challenge. Burry saw this all too often in his two decades of work as a paramedic and firefighter. He illustrates the problem using a common scenario familiar to any first responder.

“Mrs. Jones is sitting on the couch and we put our medical kits directly around her, and she’s coughing, spitting, sometimes urinating, vomiting–all these biohazards–and our kits are sitting in this microbiological stew,” Burry explained. “We get Mrs. Jones onto the stretcher and into the unit, drop her off at the hospital, and then we go on another call, often within minutes. So these medical kits and equipment aren’t disinfected in between calls; and really, how do you sanitize a fabric kit or piece of equipment with tiny folds and crevices in it?

“You attend the next call for Mr. Smith and you put your previously contaminated kits onto his bed, couch, or carpet, creating a major cross-contamination issue,” Burry continued. “Given what we know, with many bacteria and viruses, including superbugs, able to survive for hours, days, or even weeks on surfaces, we [first responders] are inadvertently becoming part of the healthcare-associated infection (HAI) problem.”

EMTs and paramedics in urban areas often receive 5-10 calls a day, and a close enough look at the contaminants these men and women come in contact with is enough to turn most anyone into a germaphobe. It’s not as though there aren’t carefully thought-out sanitation protocols in place at any North American EMS agency, but Burry says the traditional method for ambulance disinfection is time-consuming, chemical-laden and, ultimately, ineffective.

In fact, having spent 20 years in EMS, Burry knows from experience that wiping every inch of an ambulance and the equipment within is often a futile effort.

“Take an ambulance stretcher for instance, which has a thousand little grooves and nooks and crannies,” Burry said. “You physically–and I’ve done this myself hundreds of times in my career–you physically cannot properly disinfect that stretcher.”

This fear of EMS cross-contamination is far from paranoia, too. Any clustered environment where illness is commonplace can demonstrate reason for concern. In Canada, where Burry resides, the Chief Public Health Officer’s Report on the State of Public Health in Canada, 2013, states that HAIs kill up to 8,000 Canadians each year, which is approximately three times the number of people killed due to traffic accidents. Assisted living homes are a classic example of the problem, Burry says.

“The issue here is microbial transmission,” Burry said. “There’s a lot of studies that demonstrate a direct correlation between high population densities in a given space and the rate of infection.

“In an assisted or long-term care facility, which account for many EMS calls, you have a large concentration of people under one roof, and with their advanced age (and living longer due to medical science), they often have either concurrent medical problems or suppressed immune systems, so you have a perfect storm for infection transmission. The 80-year-olds typically don’t fight off infections as well as 30-year-olds.”

On top of the cross-contamination risk, Burry encountered an equally startling problem that came along with the traditional cleaning method. Sterilizing emergency vehicles is often done using powerful, toxic cleaners. Paramedics and firefighters can be trapped in very close quarters with these cleaning chemicals for hours on end. The effects of such a process were all too apparent during Burry’s time in the back of
an ambulance.

“For many years, cleaning in the back of the ambulance involved spraying [aerosolizing] really harsh chemicals, and then one day a boss came up to us and said, “˜Ah, yeah, that’s not safe, we’re not going to do that anymore,'” Burry said. “And this process was done every day or at least several times a week for years.”

Burry recalls particularly sensitive individuals who would be bailing out the back getting sick or lightheaded.

Finally, Burry encountered a solution growing popular in Europe and Singapore, and the approach is so radically different than the current operation that many might mistake it for something out of the pages of a science fiction book.

Essentially, Burry uses a method in which an ultrathin antimicrobial layer of a titanium-based mist is bound with a negative charge to any surface in a matter of seconds. The nanoscopic coating is applied using an electrostatic gun that ensures 100% wraparound coverage. The surface becomes self-cleaning because the coating creates a durable shield around all it binds to, repelling dirt or organic grime through its light-activated reaction.

Other features of the coatings are odor control and improved indoor air quality as the same process oxidizes volatile organic compounds (VOCs), combustion gases, and particulate matter. Some agents are safe enough that no personal protective equipment is required when applying the disinfectant.

So how does this nanoscopic coating stack up against the traditional method? Burry, not one for aggrandizing, says there’s no comparison.

“Essentially, it takes human error and the difficulty accessing microspaces out of the process–we don’t miss spots,” Burry said. “You just stand back three or four feet from a piece of equipment, for example a stretcher that would take 20 minutes for a person to clean, and probably only get 50% of it–and with this machine we’re getting every square micrometer of that stretcher, likely in about five seconds.”

He’s also quick to mention the system’s not a silver bullet, but rather a great adjunct to a comprehensive hygiene program–it doesn’t replace routine cleaning, and hand washing is still your best defence against spreading disease.

The University of Arizona study “Long term reduction of bacteria on surfaces in public buses,” by Charles P. Gerba, used a method similar to Burry’s on the Arizona public bus system and found buses treated with the coating had 93% fewer bacteria after 30 days than untreated buses.

Burry had spent 20 years working in the field in the Alberta region, the rigors of which had taken their toll both physically and mentally, he said. Still, his passion and his life’s work rested in EMS, and with this new method, he found a way to continue having an impact on the industry without spending his days and nights in the back of an ambulance.

“This is a cool thing for me because I still like being around Fire and EMS providers,” Burry said. “It’s what I know and I still feel very connected to the industry. Now I can offer these guys something that positively impacts their health, and their patient’s health, in a big way.”

To bring the technology to healthcare agencies, assisted living facilities and other entities where cross-contamination is a major concern, Burry launched his company Nano Defence Solutions Inc. in November 2014 in Calgary, Alberta, Canada. The company has created a line of other unique surface cleaners too, including agents that aren’t light activated, as well as nontoxic organic cleaners and sanitizers, and botanical disinfectants.

Burry holds a North American patent for his unique chemical compound used by Nano Defence Solutions, but many similar compounds have also been implemented in pockets throughout the world, mostly in Europe and Asia. In fact, when asked if he thought this technology would eventually be commonplace in medical facilities and EMS agencies, Burry said there was no doubt in his mind.

As with any dramatically new technology, there’s a too-good-to-be-true element when hearing Burry speak excitedly about its applications and its eminence in the field. However, the technology still faces some regulatory hurdles, as well as budgetary and practical concerns in implementing it into workflows at hospitals, EMS agencies or assisted living facilities. Burry remains optimistic nevertheless.

“It’s going to be everywhere, it’s just going to take some time for people to wrap their heads around it,” Burry said. “A coating that can be applied to a surface, bind to it and continue its germ-killing function for weeks and months in some cases–it’s just novel to people.”