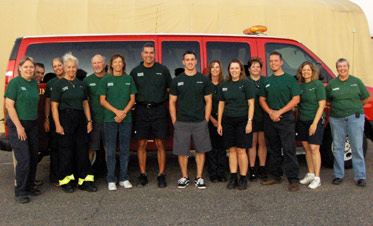 The Phoenix Fire Department recently ended a six-month pilot program that dispatched one of five “alternative response vehicles,” or “alpha trucks,” to low-acuity calls, although the Tucson Fire Department reports being delighted with its alpha truck program.

Tucson’s alpha trucks
In 2006, Tucson began sending two EMTs in an alpha truck to respond to the lowest-acuity calls. “An alpha truck crew is responsible for evaluating [persons] in need and assisting them with solving their problems. This may require some basic education or a slight change to the living environment. It may also require a social service referral,” a recent TFD press release explains.

“We started with one unit and the following year put in a second and now have a third funded, and run it [as needed] when we have the staffing for it,” said Mike McKendrick, TFD’s assistant chief for operations. “It’s really helped our response times on acute calls, and with the cost of fuel, running a half-ton pickup is much more cost effective than either large fire apparatus or even an ambulance.”

During each 24-hour shift, an alpha truck responds to as many as 10 calls the TFD dispatch center identifies as “low acuity” based on the Medical Priority Dispatch System. According to McKendrick, an alpha truck is dispatched if a call falls into one of the alpha categories for which TFD transports “about 10% of the time.” On approximately 5% of those calls, he added, the ARV crew finds the caller actually needs a higher-level response and calls for an ambulance.

“Our alpha trucks are a completely [new] third tier in our system,” he said. “We didn’t take people out of the engine companies to put them on fire calls.” Most firefighter/EMTs working on the alpha trucks are fairly new recruits who receive eight hours of training for the program, plus a half day of advanced driver’s training, McKendrick said. (The alpha trucks are outfitted with lights and sirens and sometimes respond code-three to residential fires and major trauma calls.)

TFD couples its alpha truck program with its Human Services Referral Program, which began in 2003 as the TFD Senior Assistance Program, aimed at helping elderly frequent 9-1-1 callers with their underlying problems.

The HSR program allows any TFD field personnelÆ’not just those staffing the alpha trucksÆ’to confidentially refer a patient (or other people encountered during their shifts) to other community services (e.g., Meals on Wheels, Child Protective Services, mental health services or public housing).

“All TFD crews have extra training to identify the services available in the community,” McKendrick said. “They can go back to the station and [enter information on a patient] into the Internet-based system; the idea is to get people the right kind of help.” The system automatically refers the patient to the appropriate social service agency and later provides the reporting TFD crewmember with feedback on what services were provided to the patient.

“We have some great examples where the alpha trucks and the [HSR] program worked together on long-term solutions to help get system abusers the care that they need,” he said.

According to McKendrick, the HSR program has helped 200 people identified as “frequent flyers,” reducing 9-1-1 calls by those individuals by 48%. He said Tucson and Phoenix started their alpha truck programs “with the same goals, but ran different models.”

Phoenix ends its program
Assistant Chief Bobby A. Ruiz, who heads PFD’s medical operations, said PFD halted its ARV pilot in late spring “because it didn’t do what we were hoping, which was to reduce call volume on some minor calls to get companies back into service quicker. It just didn’t reduce the numbers the way we thought it would.” The PFD was using five pickup trucks staffed by two EMTs to respond to alpha-level calls and help address callers’ needs without transport.

According to Ruiz, a significant number of the calls the PFD’s Regional Dispatch Center identified as “minor,” prompting an ARV response, turned out to require ALS because the information callers provided to dispatchers often downplayed the symptoms that prompted the calls. The dispatch center uses “a modified” Medical Priority Dispatch System, he said.

“We also found that much information that came in [to dispatch] was very vague, so we ended up sending a full truck,” Ruiz said.

PFD is now trying a new deployment plan in an attempt to get better results than its alpha truck program. “We have five or six rescue ambulances that have one ALS and one BLS person, and we’re hoping these will do what the alpha trucks did not,” he said. If a low-acuity call “turns out to be a true ALS call, we can send the other ALS medic from the engine on the ambulance so there are two paramedics.” PFD considers a unit staffed by one EMT and one paramedic a BLS unit; PFD ALS units carry two paramedics.

PFD is also implementing a program that should make paramedics in every one of its stations and all 58 ladder companies an ALS company. PFD currently has 33 rescue companies (ambulances), and it employs 1,938 people, some 600 of whom are paramedics.

Ruiz said PFD paramedics don’t have a problem keeping up their skills. “Our slowest truck probably gets eight calls on a slow day, and a busy truck gets 16à18 on a busy day, and 85% of our calls are medical calls,” he said. He added that PFD also emphasizes EMS quality improvement and continuing education.