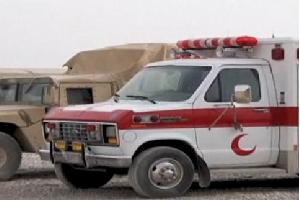 ASHBURNHAM – Now that officials have sent an ambulance to Afghanistan, they are planning the next step: training Afghans as emergency medical technicians and compensating them for their work.

Fire Chief Paul J. Zbikowski said the paperwork was filed last week to incorporate “Ambulances for Afghanistan” as a nonprofit.

The Ambulances for Afghanistan project is believed to be the first – and maybe only – effort in the nation to ship a fully equipped ambulance over for use by the Afghan people.

Now, the project is taking a further step.

The Ashburnham Fire Department is one of the few fire departments in the area accredited to train EMTs, said Chief Zbikowski. In collaboration with Cushing Academy, Harvard University and the Massachusetts Fire Chiefs Association, Ashburnham’s department is putting together a training program for Afghans, he said.

All training materials will be translated into their native language, and instructors from departments throughout the state will travel to the country next year to help train Afghans. The trained Afghan EMTs will also be paid about $30 a month through Ambulances for Afghanistan for their work.

“Over there, doctors get paid $60 a month. We could fund a couple of EMTs on each ambulance to get them up and running. It’s something to help build jobs over there, too.”

The group will also send hospital and fire equipment, he said.

“We’re excited about it. The paperwork is filed to incorporate as non-profit and we’re waiting for approval. We plan to have large fundraisers and we’re in the process of developing training outlines and programs to teach EMS courses before sending over any more ambulances or EMS equipment.”

In 2008, the Ashburnham Firefighters Association was presented the Seven-Seals Award from the Department of Defense for its efforts in getting the ambulance shipped to Afghanistan.

The ambulance was obtained at the request of former Ashburnham Town Administrator Kevin E. Paicos. Mr. Paicos was serving as a medic in the National Guard special forces for almost a year on a firebase in Farah province in south central Afghanistan.

He treated around 600 to 800 people a week. With few medical facilities in the war-torn region and a population of over 350,000 to 400,000, there is an evident need for adequate medical care and supplies, he said.

While deployed there, Mr. Paicos frequently made requests for donations from people back home for Afghan children and families, including movies, candy and educational materials. Half-jokingly, he asked if the Ashburnham Firefighters Association could send over an ambulance.

Mr. Paicos was treating a 12-year-old boy who had been hit by a National Army truck and was seriously injured, he said. He was able to stabilize and treat him, but the boy had to be transported for further treatment in the back of an old truck.

Chief Zbikowski subsequently went on a quest. Fire District 14 on the North Shore donated a 1983 ambulance and the Ashburnham Firefighters Association bought backboards, gauze and bandages.

The vehicle was worth around $70,000, but showing the Afghan people that Americans do care about their success and their ability to live in peace, was invaluable, Chief Zbikowski said.