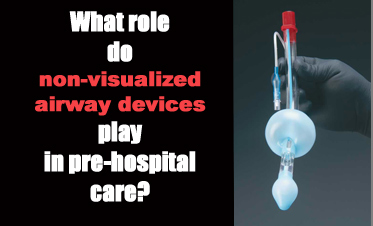 This interesting study comes to us from the STAT Med Evac air medical service in Pittsburgh. They implemented the King LTD non-visualized airway as a rescue tool for difficult airway management. During the 10 month study they had 575 pre-hospital intubations. The flight crews, nurse and flight medic, were instructed to use a non-visualized airway after three failed intubation attempts or initially if they felt that endotracheal intubation would be difficult. They were able to administer paralytics to all patients.

Of the 575 intubations, they resorted to the King LTD in 26 patients and the Combitube in one. They confirmed tube placement and efficacy of ventilations with wave-form capnography. The majority (23/26, or 88%) were trauma victims.

They concluded that the King LTD was a satisfactory alternate airway device.

This study joins a growing number of studies exploring the role of non-visualized airways in EMS. Clearly, this small sample can t be extrapolated to other services or used to set a standard of care but it does highlight several issues relevant to pre-hospital airway management.

First, this was a highly qualified flight crew with a program that requires 12 live intubations a year to maintain proficiency. Despite this high level of training, combined with the use of RSI, they still had an ETI failure rate of 4.5%. How does your service compare?

Second, one has to wonder what the impact would be if they only allowed one ETI attempt, as does the San Diego Fire Department. Does a benefit exist in going to an alternate airway device earlier? This question is being examined by Regions Hospital EMS in Minnesota with a study of RSI followed by immediate King LTD placement.

And finally, this study underscores the point that all pre-hospital airway management should be considered difficult and approached with extreme caution armed with multiple back-up rescue plans.