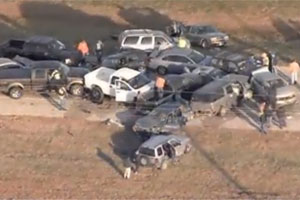 Jefferson County Sheriff’s Office Deputy Rod Carroll said at least 50 vehicles crashed but that nobody died in the chain-reaction collisions around 5:45 a.m. on Highway 73, five miles west of Port Arthur.

“Thank God it was before the school buses started running,” Carroll said.

Many of the 54 victims were treated for injuries including broken bones, abrasions and trauma, and one man suffered a heart attack, Carroll said.

“Those two mixed to make zero visibility,” Carroll said by phone as he surveyed the scene. Authorities closed a stretch of the highway about 80 miles east of Houston following the pileup but reopened it late morning, he said.