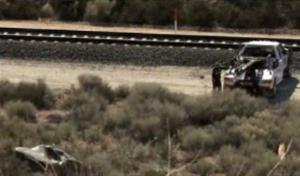 LOS ANGELES (AP) – A 9-year-old girl crawled out of a mangled SUV, climbed out of a canyon and walked about a mile in the middle of the night to find help after surviving a highway crash that killed her father in Southern California, authorities said.

The 2010 Ford Escape was launched about 200 feet down an embankment along a semi-rural stretch of the Sierra Highway in northern Los Angeles County about 1 a.m. Sunday, said California Highway Patrol Officer Cheyenne Quesada. The vehicle overturned several times.

The girl managed to extricate herself and walk through rugged terrain to a nearby home, but nobody answered the door, the CHP said. Then she hiked up the steep embankment and along the road to a commuter rail station in nearby Acton where she flagged down a passing motorist at about 2:30 a.m. Sunday.

Responding officers found a man had been killed, Quesada said. A coroner’s spokesman identified him Monday as 35-year-old Alejandro Renteria, of the North Hollywood section of Los Angeles.

A helicopter transported the girl to Children’s Hospital Los Angeles. She was treated for minor injuries including bumps and bruises and a cut on her face.

On video shot by the family in the hospital, the girl said she was cold and hurt, according to KCBS-TV. She told her family she was saddened to learn her father did not survive the crash.

The CHP is investigating whether alcohol played a role in the crash.

Acton is tucked in the mountains between the Angeles National Forest and the Mojave Desert.