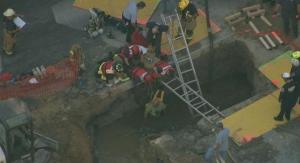 NEW MARKET, Md. (WUSA9) – A man who was stuck in a trench at a construction site has been rescued.

Crews were on the scene, in the 7100 block of Eaglehead Dr. in New Market, Md.. They rescued a man who had his legs trapped in mud, officials say. The victim who was pinned down in waist deep muddy water is a 49-year-old resident of Pennsylvania. He was working in a ditch along the roadway. That’s when a water pipe broke that caused the ditch to fill up with water, officials said.

The victim was taken to the hospital and he was responding to emergency personnel. 65 personnel helped save the victim and it took three hours.

Chief Denise Pouget of the Frederick County Division of Fire & Rescue Services said in a press release, “I am extremely proud of the response today that led to a successful outcome with the victim rescued. I want to thank all of the responding agencies from Frederick, Montgomery, and Howard counties. This was a job well done!”