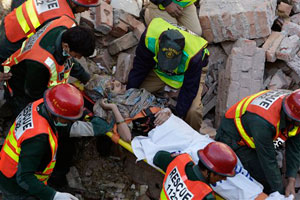 ISLAMABAD (AP) – Rescue workers on Tuesday pulled a 65-year-old woman out alive after she was trapped for 31 hours in the rubble of a collapsed factory in an eastern Pakistan city, as the death toll from the accident rose to 18.

The three-story factory manufactured medicine and collapsed Monday after several gas cylinders inside exploded. It had been set up illegally in a residential area of Lahore and continued operations even though the government tried to shut it down three times, officials said.

Rescue workers on Tuesday heard 65-year-old Saleha Bibi screaming for help, and it took them several hours to pull her out from the jagged pile of concrete blocks, said Rizwan Naseer, head of the state-run rescue service in Punjab province, of which Lahore is the capital.

Bibi said she hid underneath a machine when the roof of the room where she was working started to cave in.

“Allah saved me,” she said in an interview with the private Geo TV channel. “I was praying to Allah the whole night.”

The woman appeared exhausted but otherwise unharmed as the workers pulled her free, according to local TV footage. She drank from a bottle of water and took a deep breath before being led away from the site.

She was the 15th person to be saved and told the rescuers there were others who were still trapped alive, said Naseer.

Around 30 people are still believed to be under the rubble, said another rescue official, Asad Ahmad. Workers have retrieved 18 dead bodies so far, he said.