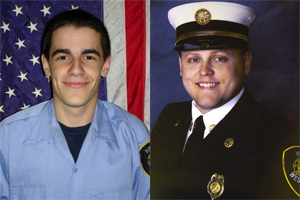 WEBSTER, N.Y. – The ex-convict turned sniper who lured two U.S. firefighters to their deaths by setting his house on fire wanted to make sure his goodbye note was legible, typing out his desire to “do what I like doing best, killing people,” police said. Charred remains found in the home were thought to be those of his sister.

Police said 62-year-old William Spengler brought plenty of ammunition for three weapons including a military-style assault rifle as he set out to burn down his New York state neighborhood just before sunrise on Christmas Eve. The rifle was the same make and caliber weapon used in this month’s school shooting in Newtown, Connecticut.

“He was equipped to go to war, kill innocent people,” Webster Police Chief Gerald Pickering said of a felon who wasn’t allowed to possess weapons because of his criminal past. Spengler had served 17 years in prison for manslaughter in the 1980 killing of his grandmother with a hammer.

When firefighters arrived, Spengler unleashed a torrent of bullets, shattering the windshield of the fire truck that volunteer firefighter and police Lt. Michael Chiapperini, 43, was driving. Fellow firefighter Tomasz Kaczowka, 19, was killed as well.

Two other firefighters were struck by bullets. They remained hospitalized in stable condition and were expected to survive.

Spengler ended by killing himself as seven houses burned. His body was found on a nearby beach hours after the attack.

Investigators on Tuesday found a body in the Spengler home, presumably that of the sister a neighbor said Spengler hated: 67-year-old Cheryl Spengler.

Pickering said it was unclear whether the person died before or during the fire.

“It was a raging inferno in there,” Pickering said.

Residents of the neighborhood who had been evacuated by armored vehicle were allowed to return Tuesday.

Spengler’s motive was unclear, Pickering said, even as authorities began analyzing the two- to three-page typewritten note he left behind.

The police chief declined to reveal the note’s full content or say where it was found. He read only one line: “I still have to get ready to see how much of the neighborhood I can burn down, and do what I like doing best, killing people.”

It remained unknown what set Spengler off, but a next-door neighbor, Roger Vercruysse, noted that he loved his mother, Arline, who died in October.

Spengler had lived a quiet life after he was freed from prison. That ended Monday morning.

“I’m not sure we’ll ever know what was going through his mind,” Pickering said.

Meanwhile, funeral services have been set for the two volunteer firefighters.

Calling hours for Michael Chiapperini (chip-er-EE’-nee) and Tomasz Kaczowka (toh-MAHZ’ kuh-CHOO’-kuh) will be held at Webster Schroeder High School from 6 p.m. to 9 p.m. Friday and from noon to 3 p.m. and 6 p.m. to 9 p.m. Saturday.

The funeral service for Chiapperini, who was also a lieutenant with the Webster Police Department, will be held at the high school at noon Sunday. He will be buried in West Webster Cemetery.

The funeral Mass for Kaczowka will be held at 10 a.m. Monday at St. Stanislaus Church in Rochester. Burial will be at Holy Sepulchre Cemetery in Rochester.