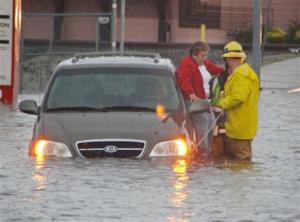 LOS ANGELES – California residents who endured flooding, mudslides and evacuations during a weeklong onslaught of rain now have another problem: contaminated water and fouled beaches.

The rain washed trash, pesticides and bacteria into waterways, prompting health warnings. Four beaches were closed in Northern California’s San Mateo County, and another 12 miles of beach from Laguna Beach to San Clemente in Southern California’s Orange County were off-limits because of sewer overflows.

Numerous motorists were rescued from swamped cars during the days of rain, but one driver was killed. The body of Angela Wright, 39, of Menifee was recovered from a car that was swept off a flooded road Wednesday near Canyon Lake in Riverside County, the coroner’s office said.

While the rain has eased, the danger was not over for foothill residents living below wildfire-scarred hillsides. “The ground is so saturated it could move at any time” and the threat will remain for several weeks, said Bob Spencer, spokesman for the Los Angeles County Department of Public Works.

More than 200 homes were ordered evacuated for more than 24 hours in La Canada Flintridge and La Crescenta, suburbs of Los Angeles below steep hillsides that burned in 2009 and where mudslides inundated homes and backyards in February.

After days of relentless rain, long-awaited sunshine was finally in the forecast for Thursday, but officials said Californians may want to resist the urge to head to the ocean. “It can be very nice the next day and everyone says ‘This is great! This is a beach day,'” said Jonathan E. Fielding, director of the Los Angeles county public health department. “It could well be but we will be monitoring and testing water and we won’t recommend people go back there until we’re sure it’s safe.”

Experts normally recommend waiting 72 hours after a storm before getting in the water, though in this case some are saying five days might be wiser. The contamination in some areas could last for weeks because of the especially heavy rains. Mark Gold, president of Heal the Bay, a Santa Monica based group that monitors and grades beach water quality, said more rain causes more pollution to get flushed into the region’s water system “Literally every beach gets an ‘F’ when we get a rain storm like this,” he said. “It’s big enough to pollute each and every beach in LA County. It’s a pretty extraordinary event when we have rain like this.”

Sixty people were rescued and more than 30 homes evacuated Wednesday when water surged through Dove Canyon, a gated Orange County community. In Highland, about 65 miles east of Los Angeles, two creeks overflowed, swamping as many as 20 homes in up to 3 feet of mud. Up to 40 homes and around 100 residents were evacuated.

In San Diego, the first floor of the Premier Inn in the city’s Mission Valley flooded, forcing guests to the second floor where lifeguards were sent to rescue them, police said. SeaWorld San Diego closed for the day as waters rose in the nearby San Diego River, but it was expected to reopen on Thursday.

Amtrak said the Pacific Surfliner train service between San Diego and San Juan Capistrano was being suspended Thursday because of threats of mudslides and high water. The storm weakened as it moved eastward, but floods still washed away homes in Arizona and inundated parts of Nevada and Utah. The low-pressure system could reach the Gulf Coast by Saturday with some rain, forecasters said.

In far northwestern Arizona, homes along a flooded wash teetered on the edge as residents scurried to gather belongings. At least six vacant homes were lost in the rural area and nearly two dozen homes were damaged. Forecasters said the Virgin River, which cuts through that part of the state, is expected to crest Thursday morning. Floods threatened to swallow a bridge in nearby Utah. The flooding forced the closure of Zion National Park on Tuesday. The south entrance and the visitor center opened on Wednesday afternoon.

In southern Nevada, a state of emergency was ordered after rain-swollen creeks closed some roads in the Las Vegas area and snow disrupted electricity to about 300 customers on nearby Mount Charleston.