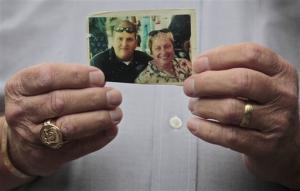 NEW YORK (AP) – There are times when Ken Fairben, still mourning the loss of his paramedic son on 9/11, thinks he will never see the end of the complex, drawn-out legal case for the men accused in his death.

But “we’re willing to stay the course,” Fairben said Monday after watching the start of pretrial hearings for five men charged in the terrorist attacks. “It’s important for us to be here to continue his legacy, his memory. We’re his voice.”

Fairben and his wife, Diane, traveled from their home in Floral Park on Long Island to Fort Hamilton in Brooklyn, to bear the torch for Keith, their only child. They were among the 9/11 families and responders viewing the Cuba proceedings via closed-circuit television in New York, New Jersey, Massachusetts and Maryland.

The suspects include the self-professed mastermind of the Sept. 11 attacks.

As he watched, Ken Fairben examined each of the five men’s faces, wondering, “What is he thinking? Why would he want to do this?”

“I feel anger. I want to strike out. I want to inflict harm on them,” he said.

Fairben said he was bothered by the defendants’ demeanor in the face of the charges – “very nonchalant.”

But he also still has “a lot of faith in the justice system” – especially after attending the trial of Zacarias Moussaoui, who is serving a life sentence without parole.

That’s what Fairben favors for the current defendants.

“If you give them death penalties, that’s martyrdom to them. Why give them something they want?”

Diane Fairben said she and her husband were “very happy with both the defense and prosecution teams. Things are being done right.”

Robert Reeg, 60, a retired firefighter who was critically injured on 9/11, expressed a similar mindset as he came to Brooklyn from suburban Rockland County.

First, there was a 2009 decision to drop earlier military commission charges. Congress then blocked civilian trials amid opposition to bringing the defendants to U.S. soil.

“It’s four years of being mentally water-boarded because of that decision,” Reeg said. But “we’re going to persevere. We want justice.”

He described Monday’s hearing as “a lot of arguing over legal points.”

After a few hours of watching the hearing, Fairben walked out of the fort and broke down in tears, remembering the last time he spoke to his son: by phone at 9 a.m. on Sept. 11, 2001.

Months later, when Keith’s remains were found, his father, who worked in the funeral business, sent a hearse to Manhattan to pick up the remains.