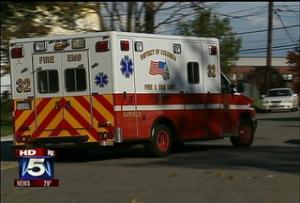 WASHINGTON – It was the worst mass shooting in DC history, but FOX 5 has learned not everyone rushed to the scene.

It was a chaotic scene the night of March 30, 2010. Nine people were shot on South Capitol Street; eventually 4 would die. The drive by shooting would send DC Fire and Emergency crews into mass casualty mode.

By 7:31 p.m., several DC Fire and EMS crews were scrambling to the scene.

However, FOX 5 has learned that one ambulance and possibly the closest one was actually hiding.

Documents show 15 minutes after the first call for help, at 7:47 p.m., Ambulance 32 was still roaming free on its way back to the Irving Street firehouse on what’s called delayed response.

The ambulance never responded to the scene.

News of an ambulance avoiding the scene brings little comfort to the grieving mother of 16-year-old Brishell Jones, Nardyne Jefferies.

The teen was one of four who died that day.

“It’s appalling. It’s very disturbing. It just hurts. Very disturbing news. It feels like another slap in the face. Your children are not worthy of proper medical treatment and leave them. Whoever gets to them gets to them,” said Jefferies as she wiped away tears.

By 7:33 pm an alert went out calling for all available ambulances to respond to the multiple shooting.

The union which represents the civilian medics says the finding is alarming.

“We need to know exactly why that ambulance was not made available especially given the enormity of the scene. We had a mass casualty scene,” Kenneth Lyons Pres., AFGE Local 3721

What happened to ambulance 32?

The fire department’s own “I” tracker program shows it was driving away from the area.

Sources tell FOX 5 an internal investigation shows the unit and its two medics did all they could to avoid the mass shooting.

“What if that was one of their children or loved one that needed help. How would you feel if you just ignore a call and children lying there,” said Jefferies.

So what went wrong? It’s not just the crews fault for avoiding the scene.

Instead, at 7:48, “I-Tracker” records show while Ambulance 30 is arriving at South Capitol Street, Ambulance 32 is still not responding.

Records show in the height of it all at 7:49 p.m. the crew asked to go get fuel and was given the okay.

Sources now tell FOX 5 that fuel records show the crew never did get fuel, instead they were allegedly eating.

According to sources, GPS tracking shows the ambulance was on Mellon Street at the home of one of the medics, just a mile and a half from the shooting scene.

DC Fire and EMS acknowledged the ambulance did not go to the scene.

In a statement, Spokesman Pete Peringer says, “The incident of the shooting and the availability of A32 have been reviewed and has been referred to a DC F & EMS Trial Board. The investigation is continuing.”

Sources say there are built-in systems to catch a hiding ambulance. Three supervisors and the Chief in charge that night caught it.

The Watch Commander, Fire Liaison and Emergency Liaison Officer all allegedly missed the automatic computer sensor which should have notified them that Ambulance 32 was missing and was perhaps closer than any other unit.

So far no one has been disciplined.

“If it’s determined that they were doing something other than that and used the delayed response to conduct personal business then I think we have a serious problem reminiscent of the Rosenbaum incident,” said Lyons.

FOX 5 has learned the trial board has reviewed the status of ambulance 32 and a resolution is expected soon.

According to documents, Ambulance 32 left Howard University at 7:09pm and was listed as “delayed response status.”

A memo dated March 2006 obtained by FOX 5 shows “delayed response status” is a rule that allows ambulance crews to head back without interruption to the fire house and the area they cover. In this case, back to southeast.

The document clearly states if there is insufficient transport services available to handle emergency calls like a mass casualty situation, they must respond.

In fact, it also says they’re supposed to closely monitor a dispatch channel while returning.