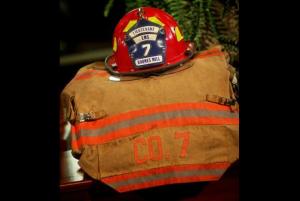 ROCKY MOUNT (Roanoke.com) – The final alarm bells rang Saturday for Lt. John Echternach Jr. of Boones Mill Fire Station 7, as family, friends and fellow first responders celebrated the life of a man who always did his duty, and did it with a playful spirit.

“People should know his story,” wife Debbie Echternach said. “He always, and I mean always, answered the call.”

Echternach’s parents were not surprised that their son, who put out his first imaginary fire at 4 years old, went on to be a volunteer firefighter and emergency medical technician, as well as a professor and practitioner of physical therapy.

And no one — from the old Boy Scout friends who came from across the country to say goodbye, to his brother and sister firefighters who carried his ashes out of the church — was surprised that he died as he lived, helping others.

An avid outdoorsman and woodworker, Echternach, 54, loved trees. He loved to walk among them and teach generations of Boy Scouts their names. He loved to fell them, and split and finish them into furniture and flooring for the house he built for his family in the 1990s.

That her husband should die after a falling tree stuck him on the head during a rescue operation in a wind storm that ravaged Southwest Virginia on June 29 “is mind boggling,” Debbie Echternach said.

John Echternach was responding to a fire that evening when he came upon a car crushed by a tree along U.S. 220. Echternach stopped to help a trapped motorist. As he worked, a gust of wind brought another tree down. It struck Echternach, critically injuring him. He died Monday at Carilion Roanoke Memorial Hospital.

Despite the shock and the waves of grief that come without warning, Debbie Echternach said her faith in God’s love for her husband, and the support of the hundreds of people who gathered Saturday for the memorial service are helping her through these first days without her soul mate.

From the podium, she thanked the first responders who cared for her husband Friday night, and kept his body functioning, so his organs could go to needy medical patients.

Rick Lassiter came from Memphis, Tenn., to honor his friend and fellow Boy Scout leader, whom he met nearly 40 years ago. He recalled a recent hike through the woods with his children, who asked Lassiter how he knew the names of every plant they came across.

“John Echternach taught me most of them,” Lassiter said.

“He knew every little weed,” said Bill Douglas of Portsmouth, another Scouting friend.

The men recalled when Echternach and friend Jeff Janosko, who flew in from Colorado to pay his respects, once mailed a slice of pizza to Douglas, who was at the time a Marine deployed to Beirut.

That sense of humor was Echternach’s trademark. He kept the remains of a black snake in the family freezer in a Cool Whip container labeled “snack,” the Rev. Paul Stutzman told the assembly. And much fun ensued when Echternach asked friends to look for a snack in the freezer.

But his memory and his work live on in everyone who follows his example, including his adult children. Jaimie is studying social work. Jeff became a paramedic.

“John helped anyone in need, regardless of their politics, their faith or their behavior,” Stutzman said. “We need more people like John.”

Echternach’s ashes were to be interred later in a private family ceremony.

The Echternach family is asking anyone who has a story about John to contribute it for a book being put together in his memory. Send stories to Onwardmk4@yahoo.com.