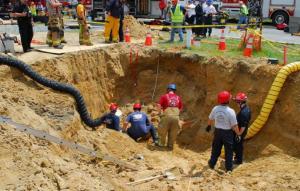 BRIDGEVILLE, Del. (AP) – Authorities in Delaware are investigating a deadly trench collapse at a construction site in Sussex County.

Authorities said 47-year-old Richard A. White of Milford died Thursday morning when the trench he was working in collapsed at a job site in the Heritage Shores development in Bridgeville.

Emergency crews worked for almost five hours to recover the man’s body, which was buried beneath several feet of sand and dirt.

White was part of a construction crew from Walter Sharp and Sons working to connect a sewer lateral from an underground main line to a house being built at the site.