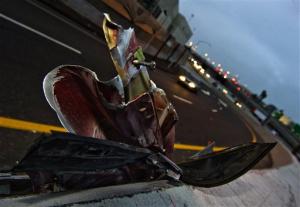 BUENA PARK, Calif. (AP) – Three women were killed and another woman and a 16-year-old girl were killed in a fiery crash on an Orange County freeway as they headed home from a Crystal Cathedral church service, authorities said Tuesday.

The victims – Sara Flores, 40, Angela Cid-Del Prado, 49, and Elda Nava-Mayo, 24 – were all members of a Downey family, authorities said.

The SUV hit a guardrail, flipped and rolled across an on-ramp before coming to rest in a grassy area about 40 feet away. Four people were hurled from the SUV before it burst into flames and bystander helped free the 41-year-old driver, Montoya said.

The driver and the 16-year-old girl were taken to a hospital with moderate to major injuries, Montoya said.

The cause of the crash was under investigation but one possibility is that the SUV was going too fast to make the curve, Montoya said.

No alcohol was involved in the wreck, he said.

The occupants of the SUV were members of the cathedral’s Hispanic ministry, which has been holding spiritual revival meetings this week, church spokesman John Charles said.

A prayer service was held for the family Tuesday morning.