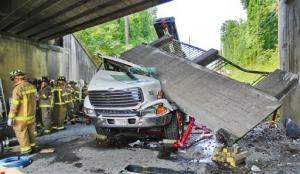 ATLANTA (AP) – Authorities said two people were hurt after a truck hit a bridge and a large chunk of concrete fell onto a vehicle.in northwest Atlanta.

Atlanta Fire Capt. Jolyon Bundrige says one person was freed from the truck, and was in stable condition at Grady Memorial Hospital with non-life-threatening injuries.

He says a woman in a car behind the truck was also taken to Grady with minor injuries.

Atlanta police spokesman Curtis Davenport told the Atlanta Journal-Constitution the garbage truck driver was charged with unsecured load, failure to obey a traffic control device and collision with an object adjacent to the street.