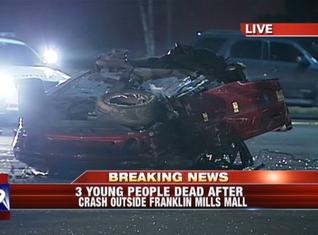 Police say a car was speeding through the parking lot when it hit a concrete barrier and flipped over twice. The damage was so extensive that investigators were having trouble finding two wheels.

Two men in their late teens to early 20s were thrown from the car and killed.

A third passenger, a woman in her late teens, was alive when police arrived but pronounced dead a short time later.

FOX 29’s Chris O’Connell reported live from the scene on Wednesday night. He spoke with a witness who saw the car speeding at 70 to 75 mph around a bend just before the crash.

Police have not yet released the identities of the victims. The red Pontiac was registered out of Bensalem.