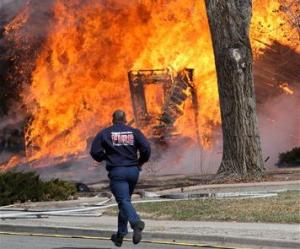 GRAND JUNCTION, Colo. (AP) – Three people have been injured in a home explosion near a leak in a natural gas line in Grand Junction.

Xcel Energy says a construction crew unaffiliated with the utility had been working in the area.

Authorities say firefighters were at the leak site Tuesday afternoon when they spotted a fire at the home, which then exploded due to the gas inside. One person in the home is out of the hospital, but two others remain hospitalized.

The home and one next door were left to burn to use up leaking gas.

Grand Junction High School was evacuated but will be open Wednesday. Tope Elementary remains evacuated. About 75 homes also were evacuated through Tuesday night.

The incident temporarily left Colorado Mesa University without gas and 104 buildings without electricity.