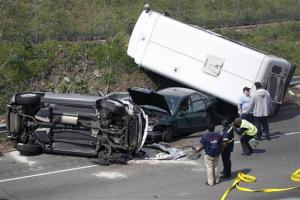 PHILADELPHIA – Three people are being taken to the hospital after a Philadelphia paratransit bus crashed while trying to avoid another vehicle.

A spokesman for the Southeastern Pennsylvania Transportation Authority says the accident happened shortly after 1 p.m. Wednesday on Roosevelt Boulevard in the city’s East Falls section.

The SEPTA spokesman, Andrew Busch, says the paratransit bus was heading southbound when another vehicle cut it off. Busch says the bus swerved to avoid the collision and then tipped over on its side.

The bus’ operator, a passenger and the passenger’s caretaker have all been taken to the hospital. Busch says he doesn’t know the extent of the injuries.