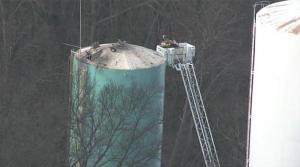 EAGLEVILLE, Pa. (AP) – One person has died and one has been rescued after falling about 100 feet into an empty water tank outside Philadelphia.

Carroll says the victims were with a New Jersey-based business hired by Audubon Water Co. to clean its empty tanks. Their names have not been released.

Montgomery County coroner Walter Hofman says the man who fell in the tank and survived was suspended above the ground by a safety harness. It took rescuers about three hours to get him out. He is hospitalized but his condition hasn’t been released.

Lower Providence Township is about 25 miles northwest of Philadelphia.