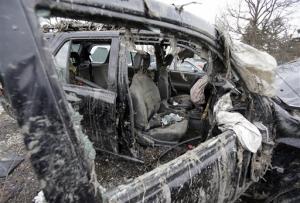 WARREN, Ohio (AP) – One of two Ohio teenagers who survived a crash that killed six friends says the driver was speeding before she hit a guard rail and the SUV flipped into a pond.

Eighteen-year-old Brian Henry of Warren tells reporters he’s not sure what the group had been doing earlier because he caught a ride with them after the other boys were already in the vehicle.

Henry says he used his elbow to break a window and escape after the crash early Sunday in Warren, about 50 miles southeast of Cleveland. He and another boy who escaped ran to a home to call for help.

The car was reported stolen Monday. It wasn’t clear whether the passengers knew the car was stolen.