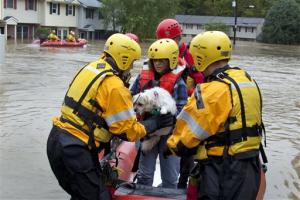 NEW YORK (AP) – Even after 9/11 and Hurricane Katrina, most Americans have a false sense of security when it comes to their readiness for a natural disaster or major terrorist attack, according to researchers at Columbia University.

A new survey by the National Center for Disaster Preparedness at Columbia’s Mailman School of Public Health found that slightly more than half of all families had no plan for what to do in an emergency like a big hurricane or earthquake. Many of those who did have plans said they lacked some or all of the items that experts commonly recommend that people keep on hand for a disaster, including two days of food and water, a flashlight, spare batteries and a list of key phone numbers.

Nearly one-third of people responding to the survey said they believed that even in a catastrophe, they would be able to summon rescuers within an hour by calling 911, while 30 percent more said they thought a 911 call would bring help within several hours. Only 19 percent said it could take more than a day.

That kind of confidence is unrealistic, said the center’s director, Dr. Irwin Redlener. He noted that after the Sept. 11 attacks in 2001 and the earthquake that struck Japan six months ago, phones stopped working and police and fire departments became overwhelmed. Even after relatively minor disasters, like the blizzard that paralyzed New York City last December, response times for paramedics and police plummet.

And yet, “many, many people believe that within an hour or two, you will have someone knocking on your door,” Redlener said. “There has been a strange delusion that, even after all we have been through, the rescue response will occur rather rapidly.”

He said that if Irene, the storm that recently soaked the East Coast, had turned out to be a truly powerful hurricane, “EMS and every other emergency service would have been totally overwhelmed. You wouldn’t have been able to make a phone call.”

Disaster-planning specialists generally advise people to be prepared to care for themselves during those types of emergencies, especially if they live in an area that is prone to wildfires, floods or bad storms.

Common advice: Have a designated family meeting spot. For people with chronic illness, have enough medication on hand to last for several days. Collect critical documents in advance to take with you in an evacuation, like passports, mortgage papers and birth certificates.

The survey of 1,000 adults was administered in August by the Marist Institute for Public Opinion. It had a margin of error of plus or minus 3.1 percentage points for most questions. The survey was released Thursday during a daylong conference at Columbia on disaster preparedness a decade after 9/11.

Among parents, the survey found that 36 percent were not very familiar, or not familiar at all, with the evacuation plans at the schools attended by their children.

It also found that 63 percent of respondents think the U.S. is safer now than on 9/11, although 72 percent are still concerned that an attack could happen.