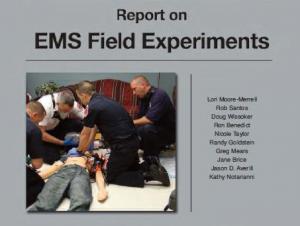 Fairfax, Va., Sept. 30, 2010… A new EMS depolyment study  has been issued by a broad coalition in the scientific, firefighting, EMS and public-safety communities. The study shows that the size and configuration of an EMS first responder crew and an advanced life support (ALS) crew has a substantial effect on a fire department’s ability to respond to calls for emergency medical service.

The Fire Fighter Safety and Deployment Study’s Report on EMS Field Experiments is the first attempt to investigate the effects of the following on the task completion times for ALS-level incidents:

– The apparatus assignment of ALS personnel

– The number of ALS personnel on scene

The increasing number of EMS responses point to the need for scientifically-based studies to measure the operational efficiency and effectiveness of fire departments responding to medical calls. Fire departments typically deliver first-on-scene, out-of-hospital care services, regardless of whether they provide transport. The design of fire service-based EMS systems varies across communities. Some departments deploy only basic life support (BLS) units and personnel, others deploy a mix of BLS and ALS units and personnel, and a few departments operate solely at an ALS level.

This study emphasizes that every one of those system-design decisions affects emergency medical response and care when each second counts.

Additional information on the Fire Fighter Safety and Deployment Study can be found online.