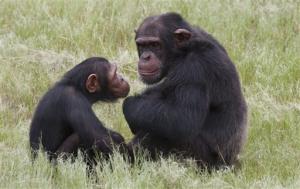 JOHANNESBURG (AP) – Chimpanzees at a sanctuary for the animals in eastern South Africa pulled an American working there into their enclosure, where they severely bit him and dragged him nearly a kilometer (half mile), according to a parademic official and local media reports.

The man, described as a ranger, was leading a tour group at the Jane Goodall Institute Chimpanzee Eden Thursday when two chimpanzees grabbed his feet and pulled him under a fence into their enclosure, Jeffrey Wicks of the Netcare911 medical emergency services company in a statement obtained by The Associated Press on Friday.

The man had “multiple and severe bite wounds” and was dragged nearly a kilometer by the chimpanzees, Wicks said.

Beeld, a South African newspaper, reported Friday that the man was an American researcher who was giving tourists a lecture at the time of the attack. The tourists were escorted to safety by staff members as the chimpanzees dragged the man out of their enclosure, Beeld reported. The sanctuary’s director fired into the air to scare the chimps away from the man, and then chased the animals back into their enclosure. Beeld reported the man lost part of an ear and parts of his fingers.

The Associated Press did not immediately get responses to phone calls and an email seeking comment from officials at the institute and its sanctuary.

The international institute founded by renowned primatologist Jane Goodall opened the sanctuary in 2006. It is a home to chimpanzees, which are not native to South Africa, rescued from further north in Africa. Some of the chimpanzees at the sanctuary lost their parents to poachers in countries where they are hunted for their meat, and others were held in captivity in cruel conditions as little more than roadside attractions.

In the United States this week, lawyers for a Connecticut woman severely disfigured in 2009 when she was attacked by a friend’s pet chimpanzee, filed papers accusing state officials of failing to seize the animal before the mauling despite a staff member’s warning that it was dangerous.