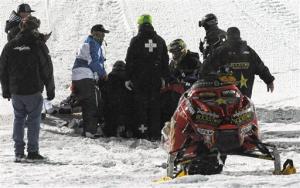 DENVER (AP) – Snowmobiler Caleb Moore was in critical condition Tuesday in a Colorado hospital after a dramatic crash at the Winter X Games in Aspen, and a relative said the family wasn’t hopeful about the 25-year-old’s chances for survival.

Moore was performing a flip Thursday when he clipped the top of a jump and went over the handlebars and landed face first into the snow. The snowmobile rolled over him, but he walked off with help and went to a hospital with a concussion.

Moore later developed bleeding around his heart and was flown to a hospital in Grand Junction for surgery. The family later said that Moore, of Krum, Texas, also had a complication involving his brain.

“Caleb is not doing good at all.” Caleb’s grandfather Charles Moore told The Denver Post. “The prognosis is not good at all. It’s almost certain he’s not going to make it.”

A family spokeswoman reissued a statement Tuesday thanking fans, friends and family for their support and asked for continued prayers. The family declined further comment.

A separate accident on Sunday left Moore’s younger brother, Colten, with a separated pelvis at Winter X, an increasingly popular event that showcases the world’s best action sports athletes in a festival atmosphere.

The safety of the snowmobile events has fallen under scrutiny with several recent accidents and mishaps. In addition to the crashes by the Moore brothers, there also was a scary scene when a runaway sled veered into the crowd Sunday night after the rider fell off during a jump gone wrong.

In that incident, snowmobiling newcomer Jackson Strong tumbled off his machine during the best trick competition. The throttle stuck on the 450-pound sled and it swerved straight toward the crowd as fans scurried out of the way.

In a statement, X Games officials said their thoughts and prayers were with Caleb and his family. They also said that they’ve paid close attention to safety issues during the event’s 18-year history.

“Still, when the world’s best compete at the highest level in any sport, risks remain. Caleb is a four-time X Games medalist who fell short on his rotation on a move he has landed several times previously,” the statement said.

Moore grew up racing all-terrain vehicles in Texas and crossed over into snowmobiling after he got tired of running around a track and because it offered better sponsorship opportunities, his agent, D.C. Vaught, said. Two weeks after Vaught said he taught the 17-year-old Caleb to do a backflip, he said he was ready for prime time, and joined Vaught’s road show, including a trip to Europe.

“Whatever he wanted to do, he did it,” Vaught said.

He said Moore set up a practice ramp 70-feet long and 10-feet deep in Krum, a town of about 5,000 people 50 miles northwest of Dallas that rarely sees snow and where snowmobiles are as rare as toboggans.

Caleb began launching his snowmobile into pools of foam a month before the 2010 X Games. After a brief training run on snow ramps in Michigan, Vaught said he joined the big leagues and never looked back. In the off-months, he still uses the foam pit in Texas for practice.

Tucker Hibbert, who won his sixth straight SnoCross title at Winter X, hopes all these unfortunate incidents aren’t what people think of when they think about snowmobiling.

“Obviously, at the X Games, you’re seeing the most extreme side of our sport,” said Hibbert, who’s from Pelican Rapids, Minn. “It’s definitely dangerous and exciting all at the same time. But it’s also a lot different than what snowmobiling in general.

“Friends and family riding around, going down the trails, having fun riding snowmobiles, is quite a bit different than hitting a 100-foot ramp and doing double backflips. Naturally, you’ll see some injuries and some pretty big crashes when you’re pushing the limits.”

Vaught said Moore’s only previous injury was a bruised hip that sent him to the hospital last year, where he was treated and released.

“In sports, everybody makes mistakes, even if it’s rare. Caleb made a mistake. That’s it,” said Vaught, who witnessed Moore’s crash.

The spills at Winter X weren’t just limited to snowmobiles. Rose Battersby suffered a lumbar spine fracture in a wipeout on a practice run before the skiing slopestyle competition. She was transported to Denver on Sunday and had feeling in all extremities, according to X Games officials.

Soon after her crash, Ashley Battersby, who’s not related to Rose, wiped out on the course and slid into the fencing. Battersby was down for at least 30 minutes before being carted off on a sled and taken to a local hospital with a knee injury.

There also was a bad wipeout in the snowboard big air competition, when Halldor Helgason of Iceland suffered a concussion when he over-rotated on a flip. He raised his hand to salute the crowd as he was being taken off the icy course.

Moore’s crash came just over a year after one of the most high-profile deaths in the extreme sports community.

Canadian freestyle icon Sarah Burke died Jan. 19, 2012, after sustaining irreversible brain damage in a training accident in Park City, Utah. The 29-year-old was a pioneer in the sport and a driving force behind the inclusion of slopestyle and halfpipe skiing at next year’s Winter Games in Sochi.