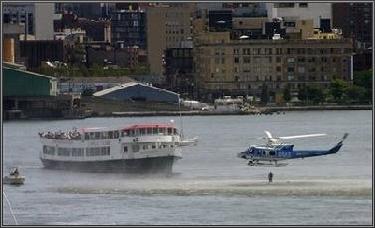 NEW YORK – A small private plane collided with a sightseeing helicopter over the Hudson River on Saturday, scattering debris in the water and forcing thousands of people on the New Jersey waterfront to scamper for cover. Nine people on both aircraft were presumed dead.

A helicopter pilot refueling on the ground at the heliport for Liberty Tours, which operated the doomed sightseeing craft, saw the plane approaching the helicopter and tried to radio an alert to the pilots, police Commissioner Raymond Kelly said. The warning wasn’t heard or didn’t happen in time.

“He radioed the accident helicopter and told him, ‘One-lima-hotel, you have a fixed wing behind you,'” National Transportation Safety Board Chairman Deborah Hersman said Saturday. “There was no response.”

The collision, which Mayor Michael Bloomberg said was “not survivable,” happened just after noon and was seen by thousands of people enjoying a crystal-clear summer day from the New York and New Jersey sides of the river.

“First I saw a piece of something flying through the air. Then I saw the helicopter going down into the water,” said Kelly Owen, a Florida tourist at a Manhattan park. “I thought it was my imagination.”

The two aircraft _ a plane carrying three people, including a child, and a helicopter with a pilot and five Italian tourists _ went down just south of the stretch of river where a crippled US Airways jet landed safely in January. But this time there was no miracle.

“This is not going to have a happy ending,” Bloomberg said.

The air accident, the deadliest in the New York City area since the 2001 crash of a commercial jet in Queens killed 265 people, also raised questions about the heavily trafficked river corridors for small planes on both sides of Manhattan. Officials considered new restrictions for the aircraft after a 2006 small-plane crash killed New York Yankees pitcher Cory Lidle and his flight instructor.

Three bodies from Saturday’s crash had been recovered before diving operations were suspended for the night, Hersman said. The helicopter’s wreckage had been found but not the plane, she said.

Tides and low visibility were compromising the recovery operation, she said. She warned residents not to touch pieces of debris that were likely to wash ashore.

Witnesses described seeing a low-flying plane smashing into the helicopter, and then wreckage scattering. One of the plane’s wings was severed by the impact.

Buzz Nahas was walking along the Hoboken, N.J., waterfront when he heard the impact, then looked up to see the plane without one of its wings “fluttering” into the water.

“There was a loud pop, almost like a car backfire,” he said. “The helicopter dropped like a rock.”

The plane, headed for Ocean City, N.J., left Teterboro Airport in New Jersey at 11:54 a.m., the Port Authority of New York and New Jersey said in a statement. It had landed at the airport 25 minutes earlier with the pilot aboard to pick up two passengers.

The plane had started its journey in Pennsylvania, an official familiar with the plane’s flight path told The Associated Press on condition of anonymity because he wasn’t authorized to speak publicly.

The plane, a Piper PA-32, was registered to LCA Partnership in Fort Washington, Pa. The address is shared by a real estate company run by Steven Altman, of Ambler, Pa. A woman who answered the telephone Saturday at Altman’s home hung up, and police wouldn’t let reporters enter a private driveway leading to the home.

The helicopter was a Eurocopter AS 350 owned by Liberty Tours, a sightseeing and charter company. It was struck by the plane shortly after lifting off from a heliport on Manhattan’s West Side.

On the Hoboken, N.J., waterfront, people scattered as pieces of debris fell from the sky. A wheel from one of the aircraft lay on Hoboken’s Sinatra Drive.

“We saw the helicopter propellers fly all over,” Hoboken resident Katie Tanski said.

Afterward, much of the wreckage sank quickly into the river.

The accident happened in a busy general aviation corridor over the river that is often filled with sightseeing craft on nice days.

Pilots have some freedom to pick their own routes, as long as they stay under 1,000 feet and don’t stray too close to Manhattan’s skyscrapers. The skies over the river are often filled with pleasure craft, buzzing by for a view of the Statue of Liberty.

Steve Riethof, a volunteer at the Aviation Hall of Fame in Teterboro, N.J., said Saturday that pilots headed for the Jersey Shore from Teterboro generally fly through Manhattan.

In January, the river was the scene of a spectacular aircraft landing that resulted in no loss of life after a US Airways flight taking off from LaGuardia Airport, in Queens, slammed into a flock of birds and lost power in both engines. The plane crash-landed in the river, and all 155 people on board were pulled to safety.

A report by the U.S. Department of Transportation’s inspector general last month found that 109 people died in accidents involving on-demand flights in 2007 and 2008, while no one died in commercial airline accidents.

The identities of the victims of Saturday’s crash were not immediately released. Italian Foreign Ministry spokesman Maurizio Massari confirmed there were Italians aboard the helicopter and said the ministry was working to find out further details through diplomats and authorities in New York.

Paola Casali, from Rome, was scheduled to take a helicopter tour with Liberty after noon on Saturday, but her 13-year-old son, Lorenzo, was too scared to go.

“I feel very, really lucky,” Casali said. “I think God was in our life. Today is the beginning of a new life, to catch every moment, every minute of this life.”

A person who answered the phone at a Liberty Tours office said the company would be releasing a statement. The company runs sightseeing excursions around the Statue of Liberty, Ellis Island and Manhattan at costs ranging from $130 to about $1,000.

Two years ago, a Liberty helicopter fell 500 feet from the sky during a sightseeing trip. The pilot was credited with safely landing the chopper in the Hudson and helping evacuate her seven passengers.

In 1997, a rotor on one of its sightseeing helicopters clipped a Manhattan building, forcing an emergency landing. No one was hurt.