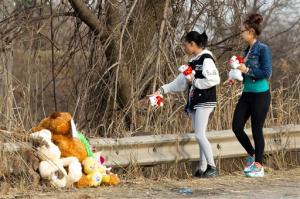 WARREN, Ohio (AP) – The mother of one of six teenagers killed in a northeast Ohio crash says the victims and two boys who survived the accident were close friends and lived in the same neighborhood.

A sport utility vehicle carrying eight teenagers smashed into a guardrail and flipped into a swampy pond early Sunday in Warren, killing five boys and the young woman driving. The State Highway Patrol says two boys escaped from the submerged vehicle and ran a quarter-mile to a home to call 911.

Deanna Behner tells Youngstown TV stations WKBN and WYTV that her 15-year-old son, Kirklan Behner, and the other teens lived in the same area of Warren’s east side.

It’s unclear where they were headed. Investigators have focused on speed as a key factor in the crash.