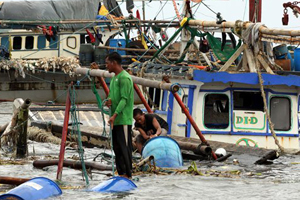 MANILA, Philippines (AP) – Fierce wind and heavy rain from a slow-moving, offshore typhoon battered the Philippines again Tuesday, killing at least 10 people, displacing 145,000 others and briefly scaring authorities when it veered onto a direct path toward the archipelago.

Typhoon Saola later shifted to blow away from the Philippines after lashing Manila and two-thirds of the nation since Sunday.

“The typhoon was making a U-turn for three hours and that gave us a scare,” said Benito Ramos, who heads the country’s disaster-response agency. “But we’re still keeping a close watch.”

Saola, which has sustained winds of 120 kilometers (74 miles) per hour and gusts of 150 kph (93 mph), was blocked by a high-pressure area that forced its slight veer to the west, according to Manila’s weather bureau.

One of the victims was a 64-year-old woman who was hit by a landslide early Tuesday after she climbed on her roof to fix a leak while rain pounded the northern mountain town of Itogon, officials said. Most others drowned or were hit by falling trees or debris.

Coast guard, police and villagers were searching for four fishermen who have been missing in Mindoro Occidental province south of Manila.

The wild weather whipped up by Saola was compounded by a separate storm that lashed Manila late Sunday and early Monday. It flooded low-lying areas and pushed two empty barges into the Tondo slum, destroying dozens of huts. Residents had already evacuated the area because of the storm and were spared injury.

Ramos said 145,000 people have fled from their homes into government evacuation centers and houses of relatives.

Authorities had to release water from two major dams in the north because of the heavy rains dumped by the typhoon, which has a massive 700-kilometer (435-mile) wide rain band.

Saola is the seventh of 20 typhoons and storms expected to batter the Philippines this year.