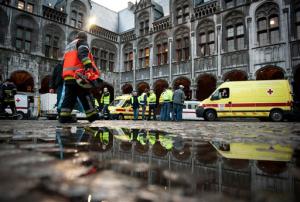 In a hard-hit New Jersey shore community, it was a break from a changed, stressful world.

Judy Kessler, who lives in Howell, says she wasn’t hit hard by the late October storm though her home was damaged and her power was knocked out. Neighbors hooked her up to their generator and with her gas stove she cooked for everyone she could.

“I’m not hoping for anything other than a lot of feel-good feelings,” she said as she walked into one of 28 movie theaters in storm-affected areas simulcasting the concert from New York’s Madison Square Garden for free.

The crowd in the theater, a short drive from the Highway 9 that Bruce Springsteen mentions in “Born to Run,” cheered when Springsteen joined Jon Bon Jovi on stage and sang along with Bon Jovi’s “Livin’ on a Prayer,” and hooted when they were filmed watching the concert as part of the broadcast.

The people watching the show near some of the spots that sustained the most damage included some whose houses are uninhabitable and others who put up friends in the weeks following the storm.

Barbara Dattoli, who had the power was knocked out at her Brick Township home for a week, said one of the most moving things about the production was knowing that hundreds of millions of viewers were seeing footage of devastation in places near her. The other was seeing the native son rockers perform together. “The whole thing was just so incredible,” said Datolli, who was wearing a “Restore the Shore” sweatshirt. “Especially Bruce Springsteen and Jon Bon Jovi.”

Jerry Frasco, a mail carrier from Toms River, said he was in awe of a lineup that included many of his favorites from 40 years ago, including The Who, the Rolling Stones, Roger Waters and Springsteen.

“We didn’t want to go through a hurricane to have it,” he said.

Joe Montagna, a retiree from Brick, said his home was fine though he did put up friends of his son’s who didn’t fare well. He said music has a special healing power and he was impressed with musicians heeding the call.

“Musicians seem to be the ones everybody looks for when tragedies happen,” he said.

Not everyone on the shore was excited about the show, though, including the mayor of Toms River, which has sections on a barrier island and the mainland that were decimated.

Mayor Thomas Kelaher said he hoped that low-profile devastated communities such as his would benefit financially. He said he fears most donations are heading to places known by tourists, including New York City and nearby Seaside Heights, where a roller coaster was dumped into the Atlantic Ocean by the storm.

He said in his community 542 people had to be rescued from a mainland area where evacuations weren’t mandatory and public works crews and police used front-end loaders to pluck people from second-story windows.

“You go up and down the streets, it’ll just break your heart,” he said.

Organizers of the Sandy benefit say that 40 percent of the revenue will go to New Jersey and the rest will be sent to relief efforts in New York and Connecticut.

The powerful storm submerged parts of New York City and knocked out electricity for millions of people in several states. It destroyed or damaged 305,000 housing units in New York and is blamed for scores of deaths in the United States, most of them in New York and New Jersey.