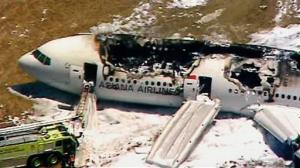 Some of the most seriously wounded had head injuries, spinal cord damage causing paralysis or bleeding injuries inside the abdomen, M. Margaret Knudson, chief of surgery at San Francisco General, said at a news briefing Sunday.

“Some of our patients have been operated on twice already,” Knudson said. “There are going to be many, many more surgeries to come.”

Two of those in critical condition arrived with “road rash” on their back, limbs and face, suggesting they had been dragged over something, Knudson said.

Some patients weren’t able to speak. Of those who could talk to doctors, most said they had been seated at the back of the plane, she said.

Doctors saw relatively few burns, Knudson said, even though the plane caught fire after the crash.

Knudson credited first responders and those doing triage on the scene for helping to save lives because they prioritized the most severely injured patients to be sent to the trauma center first.

Spinal cord injuries can be some of the most serious injuries in a crash such as this, said Samir Mehta, chief of the orthopedic and trauma service at the Hospital of the University of Pennsylvania in Philadelphia. Mehta didn’t treat any of the injured.

One survivor, Elliott Stone, told CNN that some passengers’ heads hit the ceiling during the crash.

That sort of severe impact can compress the spine, much as someone might compress a Slinky, Mehta said. That can cause vertebrae — the small bones that make up the spine — to burst, throwing shreds of bones to the sides. Those shards can act like shrapnel to injure nerves.

Spongy discs between vertebrae normally act like shock absorbers for the spine, but severe pressure can crush even those discs, Mehta said. “If it gets compressed, the bone will literally burst.”

“It’s like taking a egg and dropping a dictionary on it,” Mehta said.

Doctors need to operate immediately to relieve pressure on the nerves to prevent paralysis, Mehta said.

Patients also can be paralyzed if their heads pitch forward during a crash, knocking their foreheads against the seat in front of them, said Robert Glatter, an emergency medicine physician at Lenox Hill Hospital in New York City.

That can damage the C1 vertebrae, at the base of the skull, said Glatter, who did not treat any of the crash victims.

Andre Campbell, a trauma surgeon who was on call at San Francisco General during the emergency, said he treated some severe abdominal injuries. In some cases, the mesentery, a tissue that connects the stomach and other organs to the back wall of the abdomen, was pulled away from the intestines, probably because of the force of the crash.

“Your body is built to sustain a certain amount of force,” Campbell said. “The forces that you sustain in an air crash are larger than the body is able to take.”

“If they had not been restrained, they would be dead,” Campbell said of the passengers. “If you are not restrained, you become a projectile.”