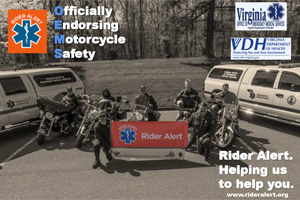 “As the first of its kind in the nation, it’s an honor to recognize Richmond Ambulance Authority’s innovative safety initiative to protect motorcycle riders,” said Virginia DMV Commissioner Richard D. Holcomb. “When the unthinkable happens, a Rider Alert card can literally save a motorcyclist’s life, providing vital information to bystanders and emergency personnel.”

Rider Alert offers free, waterproof identification cards that are placed inside a rider’s helmet to give first responders access to vital, life-saving information on injured riders involved in crashes. Each card also comes with a one-inch round sticker that goes on the outside of the helmet to indicate the biker has the Rider Alert card. This sticker also warns bystanders not to remove the helmet, which could prevent further injury. “The Richmond Ambulance Authority is proud to be a part of the Rider Alert program. Kudos to Rob Lawrence for bringing this initiative forward. Our hope is that this program will promote motorcycle safety and decrease the number of times our services are needed,” said Chip Decker, CEO of the Richmond Ambulance Authority.

“To be honored with this award is a testament to the multitude of sponsors and public safety agencies who have tirelessly supported and promoted this program and to the riding community of the Commonwealth who have literally placed our safety thought in their heads by the tens of thousands,” said Rob Lawrence, COO of the Richmond Ambulance Authority.

With the support of AAA Mid-Atlantic, Virginia State Police, Harrisonburg Public Safety Agencies, PHI Air Medical and many others, Rider Alert quickly spread throughout Virginia and has since launched in numerous states including New York, Texas, Arizona and Kentucky. To date, 195,000 Rider Alert cards have been distributed throughout the United States and a version of Rider Alert launched in Sweden in March.

“The Rider Alert Program’s tremendous success, coupled with its far reaching and rapid expansion, has been most impressive,” said Martha Mitchell Meade, manager of Public and Government Affairs for AAA Mid-Atlantic. “With motorcycle registrations on the rise and the high probability of serious injuries resulting from motorcycle crashes, AAA not only supports the program but congratulates Rob Lawrence for his great enthusiasm and unending dedication to the safety of motorcycle riders.”

“To receive this accolade at the end of Motorcycle Safety Awareness Month — a remarkable month in which Rider Alert partners have come together to preach a unified safety message – has to be one of the high points of the program to date,” Lawrence added. “Even though we have concluded the official motorcycle safety month, as far as Rider Alert is concerned, rider safety is a 24/7 event.”

About the Richmond Ambulance Authority
In 1991, the Richmond City Council and the city manager implemented an Emergency Medical Services (EMS) system that placed the patient first and guaranteed its performance to the City’s residents. Today, the Richmond Ambulance Authority responds to approximately 135 calls per day and transports, on average, 110 patients per day. RAA’s emergency response times are among the fastest in the nation with ambulances on the scene of life threatening emergencies in less than 8 minutes and 59 seconds in more than 90% of all responses. RAA is one of only 11 EMS agencies in the United States accredited by both the Commission on the Accreditation of Ambulance Services and the National Academies of Emergency Dispatch. RAA is also a Commonwealth of Virginia Accredited Dispatch Center. For more information, see www.raaems.org.