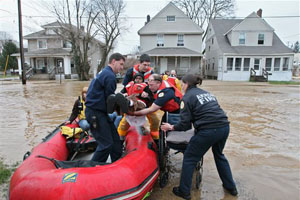 AKRON, Ohio (AP) – People were warned to boil water as a precaution after a broken 36-inch main swamped an Akron neighborhood, submerging cars, trapping residents and washing away foundations.

The pipeline was shut down after the break Thursday night, but not before rising water trapped some people in homes and cars. Nearly a dozen people were rescued by boat.

Akron Water customers in suburban Copley and Fairlawn and areas of west Akron were warned to boil water for at least two minutes before using.

Stanley Glover, 53, said the basement of his home flooded. “It was just pouring in like a water hose, busting through the foundation,” he told the Akron Beacon Journal.

Some residents who ventured onto the streets of the West Hill neighborhood ended up on the tops of their cars to avoid the water.

The pipeline break carved deep ruts into the pavement, left behind a thick layer of mud and threatened the basement of a commercial building.

Fire Lt. Jeff Schueller, a member of the Akron Fire Department’s dive team, said a boat was used to evacuate as many as 11 people from two homes that took the brunt of the flooding.

Akron Police Lt. Rick Edwards said no one was injured but loss of property might be significant.