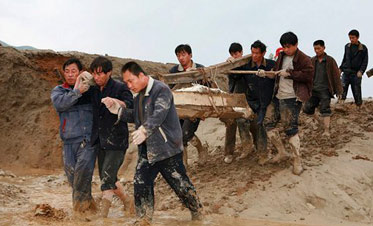 BEIJING — Rescuers shoveled and hammered at debris Wednesday searching for survivors buried under sludge, mud and mining waste in northern China after a landslide that killed at least 128 people, but hopes of finding anybody alive were fading.

The surge of mud and mining waste formed a wall measuring three stories high and 660 yards wide when it plowed into buildings Monday in a valley in Shanxi province’s Xiangfen county. Local officials say they do not know how many people remain trapped in the rubble.

State-run media had initially reported that there were hundreds of people missing, but later cited authorities as saying the figure could not yet be determined.

The accident underscores two major public safety concerns in China: the failure to enforce protective measures in the country’s notoriously deadly mines, and the unsound state of many of its bridges, dams and other aging infrastructure.

The official Xinhua News Agency cited local government official Lian Zhendong as saying rescuers had searched through 70 percent of the rubble. But local officials said Wednesday they feared the chances of survival were slim.

“There were survivors on the first day and on the second day, but from Day 3, it’s very likely that anyone we find in the future will be dead already,” said a woman surnamed Dong who heads the propaganda department of Xiangfen county.

Dong told The Associated Press in a telephone interview that more than 2,000 police, firefighters and villagers were mobilized in the search, but conditions were difficult.

“There is mud everywhere,” said Dong, who was speaking from the site where excavators and front loaders were lifting earth and debris. “It is very hard for the machines to drive through the mud.”

Also hampering rescue efforts were the rough terrain, poor telecommunications and heavy rainfall, which halted only on Wednesday, Dong said. Like many Chinese officials, she refused to give her full name.

A preliminary investigation showed that the landslide was caused by the collapse of a dam used as a retaining wall to enclose tailings from an iron mine, said Wang Dexue, deputy head of the State Administration of Work Safety.

“It is an illegal company that was using the abandoned dump to get rid of its production waste,” Wang said in an interview broadcast on state television.

Xinhua said the State Council, China’s Cabinet, will open an investigation into the cause of the landslide while nine people suspected of being responsible, including the owner of the mine, were detained.

Xinhua said several officials, including the local head of the work safety administration, the village Party secretary and village chief have already been fired for negligence.