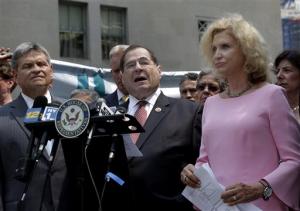 NEW YORK (AP) – New York officials on Monday urged people who may have been affected by the 9/11 attacks to apply for economic benefits before an October deadline.

U.S. Reps. Carolyn Maloney and Jerrold Nadler joined community leaders, labor officials and emergency workers for the start of a campaign to publicize the available compensation.

“Many of these men and women were there for us in our darkest hour. Now we need to be there for them,” Maloney said, standing feet from the World Trade Center site.

Oct. 3 is the deadline for the Victims Compensation Fund for economic losses due to 9/11 injuries.

The benefits fall under the so-called Zadroga 9/11 Health and Compensation Act, which Maloney and Nadler sponsored. It was passed in 2010 by Congress and signed into law by President Barack Obama.

Officials emphasized that compensation for non-economic losses includes pain and suffering such as job loss resulting from injuries at the trade center, the Pentagon or the Pennsylvania crash site.

Almost 3,000 people died when terrorists hijacked four planes. Two pierced the trade center’s twin towers, another crashed into the Pentagon in Washington and the fourth in a field near Shanksville, Pa.

First responders and survivors must complete and submit an online registration.

Tens of thousands of people already are eligible for free medical exams, treatment and medication under the World Trade Center Health Program. It covers those who lived and worked in lower Manhattan and Brooklyn in the year following 9/11 – even those who may have been exposed just briefly to possible toxins.

“There are two clocks ticking: the registration clock, and there’s also a clock ticking in your body; there have been cancers that have come up a dozen years after that are connected to 9/11,” Maloney said. “So remember to register.”

She added, “I know some people who were very healthy, and then they got sick years later.”

Uniformed Fire Officers Association president Al Hagan said some people are still too emotionally affected by the terror attacks to deal with registering.

“Whenever it’s thrust to our attention, it’s kind of like ripping a scab off the wound,” Hagan said.