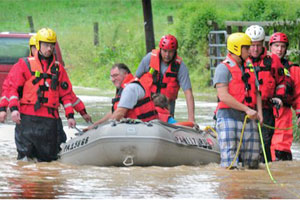 WILKES-BARRE, Pa. (AP) – Up to 70,000 people from the area inundated by Hurricane Agnes nearly four decades ago were ordered to evacuate Thursday as widespread flooding brought on by the remnants of Tropical Storm Lee lashed on already waterlogged Pennsylvania and was blamed for four deaths.

Up to 7 inches of heavy rain came a little more than a week after Hurricane Irene moved through the state. The soaking sent numerous small waterways over their banks, including one northern Pennsylvania creek that undermined a bridge abutment, causing a partial collapse.

The rain and flooding also closed schools and hampered commuters with many roads flooded out or closed because of felled trees and rockslides.

One of four spans of a two-lane bridge on Route 973 in Lycoming County collapsed after rushing water undermined an abutment, PennDOT spokesman Rick Mason said. The road about six miles outside Williamsport had already been closed to traffic because of flooding at the time of the collapse.

Luzerne County officials called for a mandatory evacuation of all communities along the Susquehanna River that were flooded in the historic Agnes deluge of 1972 – an order affecting tens of thousands of residents.

Luzerne County Management Agency official Frank Lasiewicki told The Associated Press the river is projected to crest at nearly 41 feet – the height of the levee system protecting riverfront communities including Wilkes-Barre and Kingston – between 4 p.m. and 8 p.m. Thursday. The Susquehanna River reached 40.9 feet during the historic Agnes flood of 1972.

Residents were ordered to leave by 4 p.m.

Luzerne County officials were seeking volunteers to lay sandbags on both sides of the Susquehanna, which emergency management director Stephen Bekanich said was rising at a rate of three-quarters of a foot an hour.

Officials believed the levies would contain the river.

In places unprotected by the levee system, however, emergency officials expect catastrophic flooding of 800 to 900 structures. Flood stage in many of those half-dozen municipalities is 23 feet, meaning they could be inundated with 19 feet of water. Officials say they expect the river to crest above rooftops.

But if the Susquehanna overtops the levee system, 10,000 structures throughout the Wyoming Valley could be flooded, said Bekanich.

“If we, God forbid, overtop the levee system, we’re looking at catastrophic damage throughout the whole county that borders the river communities,” he said. “This is a scary situation.”

Bekanich, who himself lives in a riverfront community, has been working emergency management in Luzerne County for 23 years and said: “This is the worst I’ve ever seen.”

Wilkes-Barre Mayor Tom Leighton told residents to “prepare themselves for an extended evacuation” of 72 hours.

Leighton, who ordered about 20,000 residents to evacuate, advised them to take clothing, food and prescription medicine. He also asked city businesses to shut down by noon.

“There is no need to panic,” he said. “This is a precautionary evacuation and the safety of our residents is our biggest concern. We have prepared for this type of emergency and we are ready to respond to whatever comes our way over the next 72 hours.”

At least four deaths have been attributed at least partially to flooding in central Pennsylvania, where emergency workers had to rescue residents from their homes or swamped vehicles.

Derry Township Police Chief Patrick O’Rourke said the body of a man in his 70s was recovered from a home Wednesday after his basement walls collapsed.

“We took a direct blow yesterday,” O’Rourke told The Associated Press early Thursday. “You can’t get from one side of the town to the other.”

Lancaster County Emergency Management Director Randy Gockley said a motorist in Elizabeth Township, near Lititz, drowned inside a car early Tuesday after a creek topped its banks. Rescuers reported between 3 and 4 feet of water covered the road, Gockley said.

A man was also swept away while trying to wade through rushing flood waters in Penn Township, according to Gockley.

“He lost his balance and got swept away,” Gockley said.