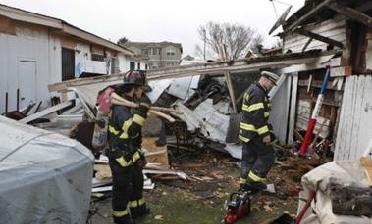 But the crash somehow caused no injuries or deaths on the ground despite a wing slamming into a home where a day care center operated. The seven people inside the house, including an infant, all escaped moments before the home went up in flames.

Federal aviation investigators said they were looking whether foggy weather played a role in the crash.

National Transportation Safety Board investigators will be at the crash site for several days and a preliminary report will be available by next week, said Josh Kawthra, an NTSB investigator.

The city of Palo Alto said most of the city and surrounding area – about 28,000 customers – had no electricity for most of the day because of the crash.

Pacific Gas and Electric Co. officials said most homes and businesses would have their electricity restored by Wednesday evening.

A spokeswoman for Palo Alto-based Facebook Inc. said its offices were without power but the outage was not affecting the Web site. Hewlett-Packard Co.’s corporate headquarters also were dark, and employees were asked to find other places to work Wednesday, a spokeswoman said.

The crash rattled Tesla Motors, one of only a few companies producing and selling purely electric cars. The identities of the employees were not released. The plane was owned by Doug Bourn of Santa Clara, identified by a Tesla spokesman as a senior electrical engineer at the company.

“Tesla is a small, tightly knit company, and this is a tragic day for us,” Tesla CEO Elon Musk said in a statement.

The Cessna crashed around 7:55 a.m. shortly after takeoff from the Palo Alto Airport and was bound for Hawthorne Municipal Airport in Southern California, according to the Federal Aviation Administration. The crash site is a mile northwest of the airport, near Tesla’s headquarters in San Carlos.

A wing fell onto the house where a children’s day care operated, and the rest of the plane struck the front retaining wall of another house down the street before landing on two vehicles on the street, Schapelhouman said. Debris also struck two neighboring houses, he said.

Pamela Houston, an employee of the day care, said she was feeding an infant when she heard a loud boom that she initially thought was an earthquake until she “saw a big ball of fire hit the side of the house.”

Houston said she screamed to the others in the house – the owner, the owner’s husband and their three children – and the group safely escaped before the home went up in flames.

“There are not even words to describe what it felt like,” she said. “I am very thankful to God that he allowed us to get out.”

The occupants of the homes have been accounted for, although authorities can’t be completely sure of the fatality count until crews begin clearing the wreckage, Schapelhouman said.

“Either by luck or the skill of the pilot, the plane hit the street and not the homes on either side,” he added. “That saved people in this community.”

Kate McClellan, 57, said she was walking her dog when she saw a plane descend from the foggy sky and strike the tower, causing power lines to swing wildly in the air.

“It burst into flames, and then it kept flying for bit before it hit some houses and exploded,” McClellan said.

The crash comes at a difficult time for Tesla, which employs 515 people worldwide and just three weeks ago disclosed plans to hold an initial public offering of stock. In its filing with the Securities and Exchange Commission, the company said its future business is dependent on the successful rollout of new vehicles.

The two-door Roadster sports car is the only product that the money-losing company currently sells, retailing for $109,000. It has sold about 1,000 since its inception, and its next vehicle – the Model S sedan – is due in showrooms in 2012. It has a base price of $57,400, although a federal tax credit could reduce the cost to less than $50,000.

Tesla has not said when specifically it plans to go public, nor has it said how much it intends to raise.