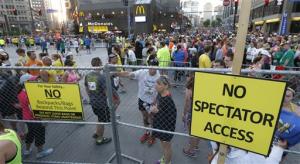 PITTSBURGH (AP) – James Kirwa of Kenya has won his second straight Pittsburgh Marathon on Sunday amid heightened security following the Boston Marathon bombings and with a contingent of runners unable to finish the Boston race.

About three dozen participants in Sunday’s race were expected to be runners who had been unable to finish last month’s Boston Marathon. A marathon spokesman said the race’s sponsor was paying transportation and lodging costs to help the 37 runners participate.

Support for Boston was evident throughout, with runners sporting pro-Boston T-shirts. One runner crossed the finish line carrying a large American flag.

Pittsburgh police were aided by Pennsylvania Emergency Management Agency staff and other area police departments in providing security. Police spokeswoman Diane Richard said a few people had received a few calls about people acting suspiciously, but they proved to be unfounded

Authorities said a runner collapsed and died during the half-marathon competition. Pittsburgh Public Safety Director Michael Huss said the 23-year-old man collapsed near paramedics at the 12-mile mark near Duquesne University. Officials said he was pronounced dead at UPMC Marcy Hospital. His name was not released. An autopsy by the Allegheny County coroner’s office was scheduled Monday.

“This is a loss for the entire marathon family and our hearts and prayers go out to his family at this time,” race director Patrice Matamoros said on the marathon’s website.

Kirwa, finishing among a group of half-marathon participants, beat his time of a year ago with an unofficial mark of 2:13:37, becoming the first back-to-back male winner since Abel Gisemba in 1993-94.

“I’m really happy, and I am coming back next year,” said Kirwa, who added that knowing the course made for a better time.

Mary Akor of Hawthorne, Calif., won the women’s marathon, collapsing in exhaustion after crossing the finish line of 2:37:35. Hirut Beyene Guangal of Ethiopia was second in 2:38:05. She was third last year.

“I put a surge on Hirut at 23 miles on the downhill and never let up. I was determined to run hard and win,” Akor said.

Marathon officials said more than 22,700 runners took part in men’s and women’s marathons and half-marathons, a record for the event.