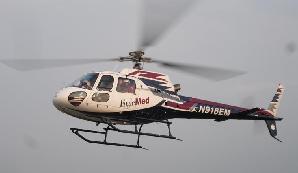 OKLAHOMA CITY (AP) – A 2010 medical helicopter crash that killed two people near Kingfisher likely was caused by the pilot’s impaired judgment due to several medications he was taking, federal investigators said.

The National Transportation Safety Board released its probable cause report Thursday on the July 22, 2010, crash that killed pilot Al Harrison, 56, of Edmond, and a flight nurse, Ryan Duke, 35, of Oklahoma City. A paramedic on board, Michael Eccard of Edmond, survived.

The report noted that toxicology reports on Harrison detected the presence of numerous medications, including a prescribed pain reliever and other drugs with sedative effects.

“It is likely that these medications would have impaired the pilot’s judgment and ability to maintain control of the helicopter,” the report states.

The report also says the surviving paramedic told investigators that during the flight, Harrison abruptly began a low-level maneuver once a conversation was struck up about flying on a coyote hunt.

“The pilot abruptly began a low-level maneuver in an attempt to demonstrate a coyote hunt flight,” the report states. “As the pilot maneuvered at low level, the helicopter and main rotor blades impacted trees and then terrain.”

The report says a review of Harrison’s medical history discovered treatment for several conditions that were not reported to the Federal Aviation Administration or to Wichita, Kan.-based EagleMed LLC, the company that operated the Eurocopter A-Star 350 helicopter.

EagleMed spokesman Jim Gregory said the company actively participated in the NTSB investigation and is currently evaluating the complete report.

“First and foremost, we continue to grieve for the family and friends of our employees who were affected by this occurrence,” Gregory said. “Safety continues to be ingrained in the corporate values of EagleMed’s continuing improvement processes.”

Two other helicopters operated by EagleMed have been involved in deadly crashes this year in Oklahoma. One crash-landed outside an Oklahoma City nursing home on Feb. 22, killing two people aboard the helicopter and critically injuring a third. A patient being transported in an EagleMed helicopter died June 11 after the aircraft crashed near the Choctaw Nation Health Care Center in Talihina.

Sean Murphy can be reached at www.twitter.com/apseanmurphy