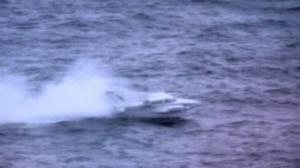 HILO, Hawaii (AP) – A small plane ran out of fuel and was ditched in the ocean several miles off Hawaii’s coast, but the pilot was rescued by Coast Guard crews who had flown alongside and coached him on crash landing in the choppy seas.

Dramatic video released by the Coast Guard shows the plane gliding low over the water and then splashing down. Within seconds the pilot climbs out onto a wing as a helicopter lowers a rescue swimmer, who helps him enter a basket so he can be hoisted to the hovering aircraft.

Police identified the pilot as Charles Brian Mellor, of Puerto De Santa Maria, Spain. The 65-year-old, who was not seriously injured, was flying solo from Monterey, Calif., when he radioed authorities Friday afternoon that he was running low on fuel about 500 miles from his destination of Hilo, Hawaii, the Coast Guard said. The cities are about 2,300 miles apart.

Mellor was taken to Hilo Medical Center, the Coast Guard said. A person answering the phone there, who declined to give her name, said Saturday that Mellor had been released. No additional details were available.

The Coast Guard had sent a plane to rendezvous with Mellor’s two-engine Cessna and dispatched a ship and helicopter to be ready for a possible rescue, spokesman Lt. Gene Maestas told The Associated Press.

After meeting up with the plane over the Pacific, the Guard’s HC-130 Hercules flew alongside for more than an hour, until the aircraft’s fuel gave out and it went down 13 miles off Hawaii.

“We were communicating to him the entire time,” Maestas said. “The pilots were telling him how to make the airplane ready … to lighten, tie things down, adjust the seat.”

Mellor was urged to go in at a low angle to the water and touch down parallel to the waves – running at strong 6 feet – rather than absorbing their power by plowing into them head-first.

“We basically talked him down,” Maestas said.

Mellor ditched his airplane about an hour before sundown.

In the two-minute video apparently shot from another Coast Guard aircraft, the plane skims the water for a few seconds before coming to an abrupt stop and spinning around in the foaming seas.

It floats upright with the pilot clinging to it but appears to begin sinking within a minute, as the Guard swimmer is lowered to waters near the plane.

“He was able to crawl out of cockpit and speak to the rescue swimmer; he didn’t appear to have any significant injuries,” Maestas said.

The video shows the swimmer hanging onto the basket carrying Mellor as it moves upward, before the swimmer drops several feet back into the water. It ends with the helicopter carrying the pilot flying off. Maestas said the Cessna sank in just a few minutes.

“We feel very fortunate that we were able to save this man’s life,” he said.