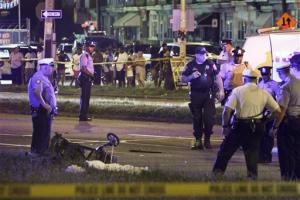 PHILADELPHIA (AP) – Philadelphia police say a third boy has died after a mother and her young children were struck while attempting to cross a busy highway. The woman was also killed and a fourth son was injured.

The accident happened around 10:30 p.m. Tuesday on Roosevelt Boulevard, a major street that runs through north and northeast Philadelphia.

The driver was taken in for questioning.