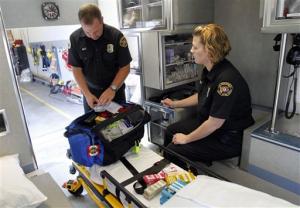 SALEM, Ore. (AP) – When paramedics ran out of a critical drug used to treat irregular heartbeats, the Bend Fire Department in Central Oregon dug into its stash of expired medications, loaded up the trucks and kept treating patients.

Paramedics reported asking some of those facing medical emergencies: “Is it OK if we use this expired drug?”

Emergency responders in various jurisdictions have reported turning to last resort practices as they struggle to deal with a shortage of drug supplies created by manufacturing delays and industry changes. Some are injecting expired medications or substituting alternatives. Others are simply going without.

As the drug crisis mounted for the Bend Fire Department earlier this year, the agency had 11 medications in its drug kits that were expired, despite risks that the pharmaceuticals might not work as intended in life-or-death situations. The crisis has eased a bit, but the agency still carries expired doses of two drugs in serving a city of 80,000 people.

“We’ve never (before) had to go diving back into the bin to try to retrieve expired boxes of drugs,” said Tom Wright, emergency medical services coordinator for the Bend Fire Department, which has been administering outdated medicines for about a year. “We had the backing of our insurance company that giving expired drugs is better than giving no drugs at all.”

He said that medics have not reported any adverse reactions.

Medications are only guaranteed to work as intended until their expiration date. When stored properly, most expired drugs won’t be harmful to patients but will become less effective with time, according to medical professionals. However, EMS officials said it’s often difficult to get information from manufacturers or regulators about how long specific medications will work.

The University of Utah’s Drug Information Service reports 275 medications are in short supply. Clinics and hospitals have reported struggles getting chemotherapy drugs to treat cancer and anesthetics used in surgery.

In the past two years, paramedics from different agencies have dealt with shortages of critical first-line drugs like Valium to treat seizures, dextrose 50 to boost the blood sugar of diabetics and magnesium sulfate for eclampsia, an attack of convulsions during pregnancy. They’ve run low on painkillers and sedation drugs.

Right now, EMS directors say they’re keeping a nervous eye on their supplies of epinephrine, for heart attacks and allergic reactions, and morphine, a painkiller.

Most of the shortages affecting emergency responders are of injectable generic medications. Drug manufacturers and the Food and Drug Administration say they’re working aggressively to track and prevent shortages, but it could take years to get supplies back to normal levels.

“Drug shortages are not a new phenomenon,” said Dave Gaugh, senior vice president for regulatory sciences at the Generic Pharmaceutical Association. “What’s new is the crisis level they’re at today.”

It was good fortune that no one around Mayer, Ariz., called 911 to report a seizure during the three weeks this year that the local fire district had no drugs to treat the condition.

“Without the medication they could actually die from the seizure,” said Paul Coe, EMS coordinator for the Mayer Fire District, which serves 10,000 residents in a rural area north of Phoenix. “We were walking on egg shells over it.”

State public health officials, who license ambulances and in some cases dictate the medications they must carry, are loosening their rules to help emergency responders deal with the various shortages. Oregon health officials last week began allowing ambulances to carry expired drugs, and southern Nevada has extended the expiration dates for drugs in short supply. Arizona has stopped penalizing ambulance crews for running out of mandated medications.

Some agencies have reported keeping their drug kits fully stocked by substituting alternative medications, some of which have additional side effects or higher costs, or by diluting higher dosages to get the less-concentrated dose needed.

Several agencies reported using morphine in place of the painkiller fentanyl, even though adverse reactions are more common from morphine. Some said they’re diluting their stronger epinephrine doses.

Even those stopgap solutions carry risks, though, as fast-moving paramedics have extra steps and new dosage protocols to remember under pressure.

“It has such significant risk of patient harm or provider error that it’s worthy of immediate attention,” said Dia Gainor, director of the National Association of State EMS Officials.

The Food and Drug Administration recommends that expired drugs not be used, although the agency occasionally allows the use of specific batches if testing has shown they’re safe.

Manufacturing quality lapses, production shutdowns for contamination and other serious problems are behind many of the shortages, according to manufacturers and the FDA. Other reasons include increased demand for some drugs, companies ending production of some drugs with small profit margins, consolidation in the generic drug industry and limited supplies of some ingredients.

“The FDA is looking into solutions that would assist first responders and hospitals to use expired medications that they may have on hand during a shortage,” said Sarah Clark-Lynn, an FDA spokeswoman, “if there is data to support the medicine is safe and effective for patients,”

The EMS community is far from united on whether to use expired drugs. Emergency responders work under the license of a supervising physician, and some doctors are uncomfortable allowing the use of drugs after the effectiveness date expires. While Oregon’s Public Health Division has agreed not to fine ambulances for carrying outdated drugs, the state medical board that licenses doctors has been silent about whether that is an appropriate practice of medicine.

In the Las Vegas area, public health officials extended the expiration for drugs on the federal shortage list for up to a year. They’ve also approved alternative medications for some uses.

“It truly was an emergency stop-gap measure used to maintain the standard of care in the Clark County system,” Jennifer Sizemore, a spokeswoman for the Southern Nevada Health District, said in an email.

In Arizona, nine EMS agencies or the hospitals where they’re based have told the state they can’t get all the drugs they need to meet the state’s minimum supply that ambulances are required to carry. Before the state relaxed the rules last November, ambulances risked being taken out of service.

“The biggest shocker to us was, drugs that have been so common, so readily available forever, were suddenly just running out,” said Deputy Chief Steve Brown, who oversees EMS at the Salem Fire Department in Oregon’s capital city. “It just creates a lot of issues for us trying to figure out what a solution is.”