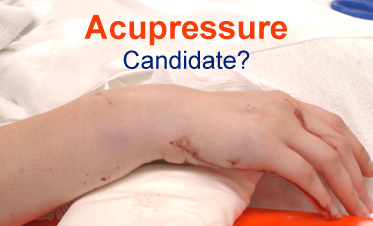 This study from Germany examined the ability of using acupressure to relieve pain in patients with a broken wrist. They randomized patients into two groups. One group received acupressure at what are considered “true” points and the control group at “sham” points, which are believed to not provide any pain relief for this type of injury.

He Gu was applied to the non-injured arm at the point marked in the drawing.

The paramedics applied moderate pressure to the points without massaging area. They then monitored the patient’s vital signs and visual analogue pain scores as well as reported anxiety level.

The control group had pressure applied to the “Ge Shu” point on the back and the “Jian Liao” point on the shoulder; points that are believed to treat anemia and shoulder arthritis respectively.

They concluded that acupressure in the prehospital setting effectively reduces pain and anxiety in patients with distal radial trauma.

I found this article fascinating. Reading the bibliography led me to resources from the World Health Organization and the Institutes of Health that propose the increased use of such homeopathic treatments for pain as acupressure, patient warming and therapeutic speech. I must confess this coincides with my Zen philosophy.

But more importantly, this study possibly provides treatment alternatives for our EMT-Basics and Intermediates who don t have access to narcotics or nitrous oxide. Even a paramedic could try this technique if IV access is going to be difficult or the transport time too short.

Of course there are those that don t believe in such things. In fact, that may be a criticism of this paper. However, the paramedics who were trained in this study confessed to have little faith that it would make a difference. They did know whether or not they were applying the acupressure to the “true” or “sham” points and that could have created the difference. It would have been helpful to have a “null” group that didn t receive anything other than transport to determine the effect of the paramedic s presence and impending delivery to the hospital on the patient s pain and anxiety.

Another confounder is that this was a relatively homogeneous group of German citizens who may have significantly different perceptions of pain compared to the general American population.

Despite these concerns I applaud the authors in breaking new ground by examining less conventional means of pre-hospital analgesia.